The Montreal Canadiens are on the verge of a 5 game winning streak for the first time this season, and have a legitimate shot at it as the lowly Carolina Hurricanes come to visit.

Montreal has defeated the Hurricanes in both meetings this season and are 7-3 against the Canes the last 3 seasons.

Carolina is having a similar nightmare season to Montreal, also backstopped by their top end goaltender in Cam Ward. Ward isn't having a banner year, but he's under siege every night behind Carolina's weak defensive corps and young forwards. Despite this, Ward owns the distinction of being the only goaltender in the NHL to have recorded all of his team's wins.

The Hurricanes have been hurt by several players failing to meet expectations of GM Jim Rutherford, chief among them Tomas Kaberle, who was traded to Montreal after being used poorly in Carolina and not fitting in. Other major disappointments in Carolina include Zac Dalpe, who was supposed to take a top 6 forward role, and Anthony Stewart, who was recently waived in an attempt to shed his contract.

Similarly disappointing has been Eric Staal, who has struggled to produce offense without his buddy Erik Cole, who's thriving in Montreal.

Travis Moen, Yannick Weber, Andrei Markov, Brian Gionta, Mike Blunden and Petteri Nokelainen make up the injured list for the Habs. Ryan White and Ian Schultz have been called up from Hamilton but it's unclear whether or not they'll play.

Carolina is missing their top defenseman as well in Joni Pitkanen, as well as backup goalie Brian Boucher. 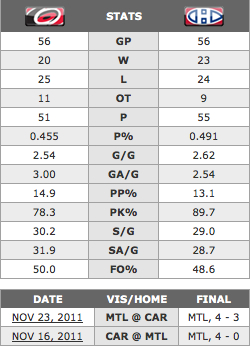 View from the other side at Canes Country