How Do Zone Starts Affect Possession?

Share All sharing options for: How Do Zone Starts Affect Possession?

For awhile now I've been wondering how much of a disadvantage players are at when they start their shifts predominantly outside the offensive zone. In order to create a better sample and use as many players as possible, I determined that I would have to use Relative Corsi as my possession metric in order to account for different team dynamics.

For the purposes of this exploration I ignored quality of competition, mostly because I didn't want to create a convoluted calculation. I'm not sure what conclusions can be drawn from the following information but I found it extremely interesting.

What I wanted to look for is how big of a change would be applied to a Relative Corsi score for each percentage on either side of 50% of the time a player started in the offensive zone on average. This way I could take that average and see how much different a player's Relative Corsi score is compared to what would be expected from an average player with the same offensive zone starts percentage.

For the purposes of better sample size I used data from Behind The Net from last season, only using players who had played 40 or more games. This yielded 566 players to draw data from. In order to avoid negative numbers, I took the absolute value of every player's Relative Corsi, as well as the absolute value of every player's offensive zone starts that differed from 50 [ABS(OZS-50)]. From there I divided the resulting Relative Corsi number for each player by the resulting deviation from 50% offensive zone starts for each player.

What I was left with was a large section of usable data, and some outliers. Any player who started less than 50+/-1% outside of the offensive zone gave back an outlier number. This resulted in an elimination of ~120 players.

With outliers removed I took the average, and what came back was that for each percentage point plus or minus 50% offensive zone starts, an average NHL player's Relative Corsi should increase or decrease by 2.3.

With this number, we can see how a player is performing in terms of relative possession while factoring in zone starts. As an exercise, i took the numbers for last year's Montreal Canadiens squad and weighed their expected Relative Corsi against what they actually produced. Here's what I got: 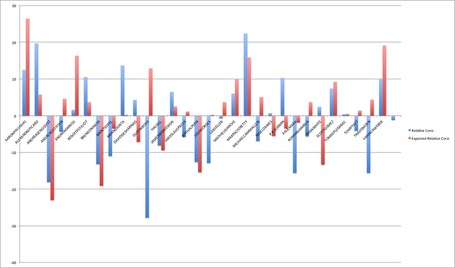 What we can see is a few things that are pretty intuitive, and a few surprises. P.K. Subban and Brian Gionta are absolute monsters by this hypothetical measure. Both players performed way above what would be expected of them with low offensive zone starts. Max Pacioretty was sheltered but still over-performed expectations by a large degree.

Others who performed better than what would be expected include Alexandre Picard, Benoit Pouliot, David Desharnais, James Wisniewski, Jeff Halpern, Hal Gill and Ryan White. Since this analysis doesn't account for quality of competition or quality of teammates, these guys make sense even if you don't think they would would be dominant intuitively. Picard was carried by Subban for 30+ games while Gill was carried by Subban the last half of the season. Similar caveats for Desharnais and White in that they played against weak competition.

The big surprises gleaned were a Corsi monster like Scott Gomez not performing to expectation, Travis Moen looking abhorrent, Josh Gorges being worse than expected and the entire top line of Mike Cammalleri, Tomas Plekanec and Andrei Kostitsyn being underwater. This metric also shows Roman Hamrlik may have been carried by Wisniewski and not the other way around as many believed, although it's not refined enough to make a conclusion.

With curiosity piqued, I figured I'd look at how this year's team is performing: 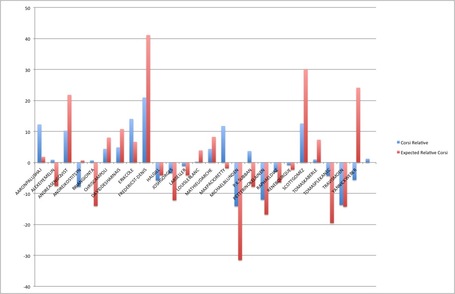 This time the strongest player on the team is Max Pacioretty, going from his sheltered role last year to taking on more tough competition. Other really strong players include Palushaj, Subban again (although less so as he's facing tougher competition), Alexei Emelin, Gionta, Plekanec and Erik Cole.

Again Gomez is way below what you'd expect him to produce, which may be a sign of decline that we've been missing at EOTP. Chris Campoli, Kostitsyn, Desharnais, Gill, Louis Leblanc, Mathieu Darche, Tomas Kaberle and Yannick Weber are all on the negative side here.

As I said before, I don't know if any conclusions can be drawn from this, and I'm going to be refining everything a bit more over the next while, however the results seem to be intuitive of what we see on the ice. Hope it was an interesting new perspective.