Game Thread: Do You Need to Know who the Habs are Playing?

Share All sharing options for: Game Thread: Do You Need to Know who the Habs are Playing?

The Leafs are currently sitting in the final playoff spot in the Eastern Conference, in a pack of five teams sperated by just five points. Their playoff chances are better than the Habs, who will need miracle run to hit the post season.

The Habs are on a roll, having won three straight, so a chance to take a piece out of the Leafs playoffs hopes couldn't please them more.

Unlike Toronto teams of the past, Ron Wilson has his boys doing a great job of holding the lead after two periods. The Leafs are 20-0-1 after 40 minutes, fifth best in the league. The Habs will not want to be behind, especially in the Blue and White's barn.

The Canadiens had no problem in Toronto in their last meeting, pulling out a 3-1 win for their first win of the regular season series. The Leafs took the first two games,

Mike Komisarek will be a healthy scratch for the Leafs.

The Leafs will honor Mats Sundin's Number 13 in a pre-game ceremony. Sundin's Former teammate Tomas Kaberle will take the ceremonial faceoff for the Canadiens

Randy Cunneyworth will decide on his lineup following the warm up. Vegas has it at even money whether he starts six or seven defensemen tonight. 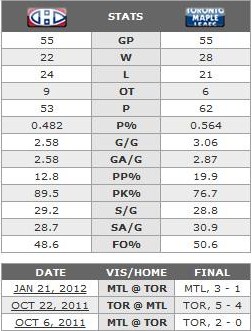 Leafs coverage from Pension Plan Puppets who's minions will be certain to drop by with a few "F the Habs" and mid-90's quality animated gifs throughout the evening.