Just last night, Max Pacioretty picked up his first career NHL hat-trick, popping in an empty net goal, as the clock ticked it's last seconds, against the New York Islanders.

The goal was Pacioretty's 22nd of the season, eclipsing any prior personal single-season goal scoring marks in his recent hockey career. Twenty-four hours later the Canadiens forward was a little dumbfounded as he and Josh Gorges greeted autograph seekers in Toronto Friday night. "It still feels kinda weird," he said as he and his teammate welcomed fans, signed autographs and posed for pictures.

Pacioretty's three goal night will be the first of hopefully many in a Habs uniform, and it came on the eve the 40th anniversary of Guy Lafleur notching his third hat-trick of his rookie season on February 10, 1972.

Our astute video man, Francis Bouchard had mentioned this feat a week back, and was able to dig up some video clips of that evening during a 7-1 routing of the Chicago Blackhawks.

Lafleur's rookie season may have been one of the most anticipated in hockey history, leading up to that point. With Jean Beliveau retiring the season prior, Lafleur was deemed the next in line in Canadiens greatness even before he set foot on the ice. Having scored 100-plus goals in two straight seasons with the Quebec Remparts (QMJHL), fans and media were expecting the 20-year-old to bear the torch right out of the gate.

It would take a four season's until that would truly emerge, but watching Francis' compilation gives us an insight into what was expected, and what would eventually become routine at the Montreal Forum and any other NHL barn.

The clip shows all eight goals from the game, from Lafleur's first on the night to Yvan Cournoyer's dashing rush up the wing tht gave you an idea why he was nicknamed "The Roadrunner."

Lafleur finished with a four point night, assisting on linemate Frank Mahovlich's 28th goal of the season. "The Big M" had assists on all three of Lafleur's goals.

Ken Dryden was in Calder winning form, making 39 saves and nearly stealing the spotlight from the scoring feats of Lafleur and Mahovlich. 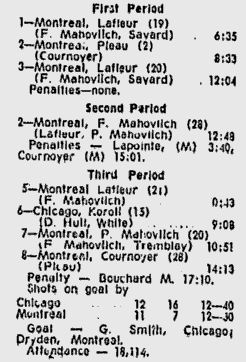 The game also marked the return of Serge Savard, who returned after missing a whole calendar year and change with a broken ankle.

"There'll be more before the season's over," said Lafleur, who was at 21 goals in his rookie season. "I can't really expect to score 130 goals in the NHL this, or any other season, but I'll settle right now for number 22." That 22nd goal game in the Canadiens next game, with 22 seconds left to play as the Habs beat the Los Angeles Kings 6-5.

Lafleur finished his rookie campaign with 29 goals and 35 assists. By comparison, Lafleur's childhood idol Beliveau had 73 points in his first full 70 game season with the Canadiens. Lafleur's point totals were more than satisfactory for a rookie, but not even enough to garner a single Calder Trophy vote in a rookie class that featured fellow future Hall of Fame inductees Dryden and Marcel Dionne.

Lafleur's three hat tricks in one season was also an NHL record for rookies until 19 years later, when Teemu Selanne recorded five with the Winnipeg Jets. His two others came agains the Minnesota North Stars and the Vancouver Canucks.