Which Montreal Canadien Wore It Best: #33

The number 33 has been worn by three players for the Habs in over a 100 years of history, but only two make it to this list. Who wore it better? Also to wear #33: Richard Sevigny and John Reilly.

Share All sharing options for: Which Montreal Canadien Wore It Best: #33 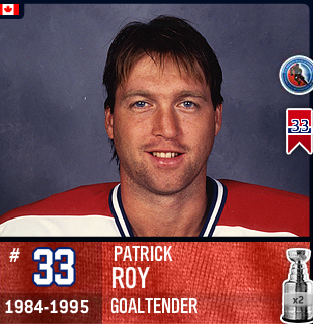 As a rookie Patrick Roy won the starting goaltender job with the storied Canadiens, but his regular season was nothing compared to what would come next. In the playoffs Roy would build himself to near legend status with unbelievable play. His .923 save percentage was 4.9 percentage points better than the regular season average NHL save percentage, which would be equivalent to a goaltender in 2012 putting up a .963 save percentage in the playoffs. A fiery player, Roy also wracked up 10 penalty minutes those playoffs while going 15-5 in 20 games en route to a Stanley Cup victory and a Conn Smythe Trophy win. As usual with young goalies, Roy struggled with consistency the next two years, but in 1989 he lead the Canadiens back to the Cup finals, falling just short against the Calgary Flames. An innovator, Roy changed the way the goaltending style was played, along with Francois Allaire, he made the butterfly goaltending style the dominant form for over 2 decades. His effect on the goaltending position was profound.

A wily veteran, Patrick Roy established himself among one of the elite goaltenders of all time in 1993, where he put on what many believe to be the greatest performance of goaltender in history. His .929 save percentage in the playoffs that year was 4.4 percentage points better than the NHL average during the season, which would be equivalent to a goaltender in 2012 putting up a .958 save percentage in the playoffs. It wasn't all rosy for St. Patrick though, 2 years removed from the cup, new coach Mario Tremblay embarrassed the man behind the mask, leaving him in the net for 9 goals against the Red Wings. Roy said he would never play for the Canadiens again, and was traded to the Colorado Avalanche, only to win a third cup that same year, and add another in 2001. Roy retired as the all time leader in games played for goaltenders, regular season wins (since beaten by Martin Brodeur), playoff wins, playoff shutouts, and most Conn Smythe trophies for any single player in NHL history with 3. His number was retired by both teams he played for, and he was inducted into the Hockey Hall of Fame as a first ballot hall of famer, perhaps the greatest goaltender of all time.