Which Montreal Canadien Wore It Best: #34

The number 34 has been worn by ten players for the Habs in over a 100 years of history, but only three make it to this list. Who wore it better? Also to wear #34: David Allison, Jim Dowd, Shawn Belle, Dwight Schofield, Nigel Dawes, Jocelyn Gauvreau, and Jeffrey Teal.

Share All sharing options for: Which Montreal Canadien Wore It Best: #34 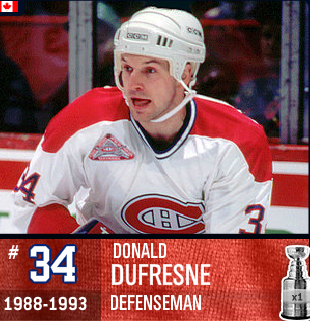 A bit player with the Canadiens for 5 seasons, Dufresne was not a stand out in any way, although he seemed to be adept at wracking up penalty minutes. A prototypical 7th defenseman who could stay in the positives at even strength, eat some minutes and not cost his team. Dufresne's crowning achievement was winning a Stanley Cup with the Habs in 1993. 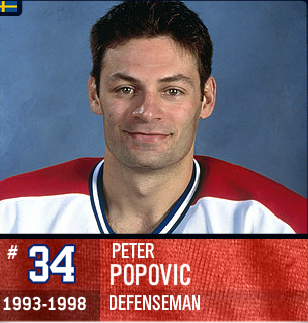 A beast of a man at 6'6" and 235lbs, Popovic was a staple of the Canadiens blueline on the defensive side of the puck during the mid-90's. Popovic was a 5th round draft pick of the Montreal Canadiens in 1988, but it took the club 5 years to lure him over to North America. Just two seasons after the Habs traded the big Swede to the Rangers for Sylvain Blouin, he decided to return home to play for Sodertalje in the Elitserien. 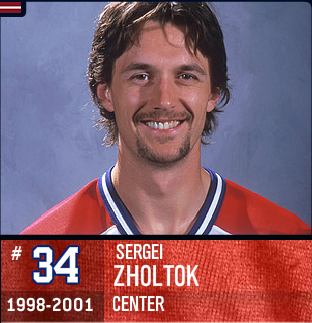 A rare Latvian NHLer, Zholtok was an example of the random names you saw scoring goals for the Canadiens in the late 90's and early 2000's. No one was around too long aside from Saku Koivu, and the point totals were never much to write home about. Zholtok did have his career year as a Montreal Canadien though, scoring an impressive 26 goals in the 1999-2000 season, including a team leading 9 on the powerplay. After a disappointing start the next year with only a single goal in 31 games, Zholtok was dealt to the Oilers for Chad Kilger. Sadly Zholtok met a tragic end far too early in his life. In November of 2004, a month before he would turn 32 years old, he suffered a massive heart attack after leaving the ice in a game against Dinamo Minsk.