Which Montreal Canadien Wore It Best: #36

The number 36 has been worn by nine players for the Habs in over a 100 years of history, but only two make it to this list. Who wore it better? Also to wear #36: Murray Baron, Martin Desjardins, Bill Kitchen, Francois Beauchemin, Todd Ewen, Gerry Fleming, and Dave Morissette.

Share All sharing options for: Which Montreal Canadien Wore It Best: #36 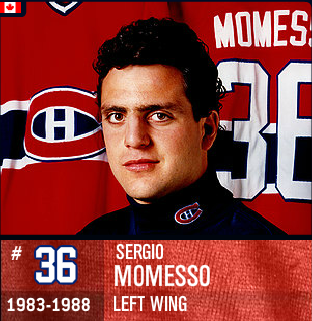 The son of sandwich shop owner in the NDG area of Montreal, Sergio Momesso now talks for a living, doing colour commentary on game broadcasts for TSN690. During his hockey career though, Momesso preferred to do his talking with his fists. Playing for the Habs in the high scoring late 1980's, Momesso even put up close to a 20 goal pace in 1986-87. Momesso went on to hit the 20 goal mark twice in his career, once for the St. Louis Blues and once for the Vancouver Canucks. It was to St. Louis that the Canadiens traded him in August of 1988, with the main piece coming the other way being a 2nd round draft pick that turned into Patrice Brisebois. 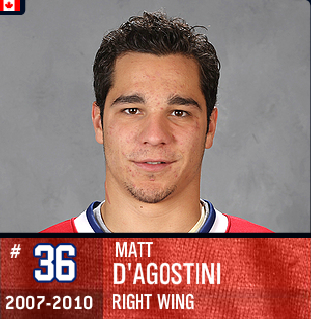 A 20 goal scoring rookie AHLer during the Calder Cup winning season for the Hamilton Bulldogs in 2007, Matt D'agostini was a 6th round draft choice of the Canadiens 2 years prior. A hot start in the 2008-09 season, coupled with injuries on the big club, got D'agostini his first long term chance in the NHL, and he took advantage on the scoring front with an impressive 12 goals in 53 games while getting limited ice time. Injury issues and defensive lapses prevented D'agostini from keeping a place in the Canadiens' top 9 the following year, and he was dealt to St. Louis for the younger Aaron Palushaj. D'agostini, like Momesso, went on to have a 20 goal year for the Blues.