As terrible as 2012 has been for (most) hockey fans in general and Canadiens fans in particular, there were some really amazing moments for a lot of us. Here's the story of an unlikely bright spot for this Habs fan.

Share All sharing options for: Why a 3-0 shutout loss was my favourite Canadiens game from 2012

This isn't one of those posts that begins with a line about how [a close relative] and I have never had anything in common, or how we've never gotten along, or something similar that posts like this usually begin with. I feel like I should have a line about that to start this post, but I don't want to lie to you guys.

The truth is that despite the almost-five-year age gap, my sister and I get along pretty well and have a ton in common, right down to a Harry Potter Rule (only ask if you really want to know). But the one thing that used to drive me crazy was that she just never understood or had any patience for my love of hockey, and, specifically, my insane relationship with the Habs.

For whatever reason, I became resigned to the idea that hockey was just going to be something we weren't going to share. I figured it was just because she isn't all that into sports, until I found out that she'd been watching the 2010 Olympic men's hockey games as well as the "Halak playoffs" without telling me.

I guess that playoff run must have turned her into a Jaroslav Halak fan, because a few months later, she announced to me that she would like to look into becoming a St. Louis Blues fan, because she thought their jerseys were beautiful (she has a musical note tattoo), and because Halak was traded to them. You'd think that I would hate that, being an Always-Team-Carey-And-Also-Sometimes-Blackhawks kind of person, but no. My sister was finally going to like hockey, you guys!

We had to wait a while after that for the Blues to come to Montreal, but they finally did, back in January. I spent the first few months of the season scrounging for tickets to the game, which were really only hard to come by because it was Halak's first game back. An awesome season ticket holder came through for me at the last minute, and I met my sister at the Bell Centre after work, me in my little Habs jersey and her in the Blues gear she got that Christmas. 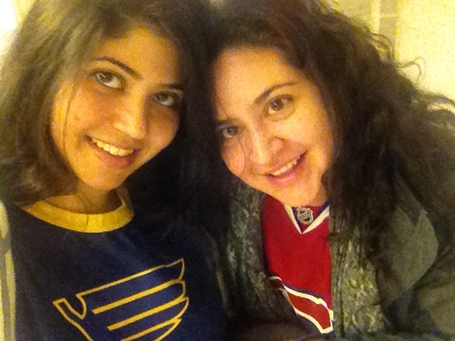 The game was... terrible, from a Habs fan perspective. I wrote at the time that it may have been the saddest Canadiens game I had ever been to, because even though Halak was back, the Bell Centre atmosphere just wasn't there. Michel Lacroix said, "Aceuillons nos Canadiens," and nobody leapt to their feet. There was cheering, but the building didn't shake. I was worried my sister wouldn't enjoy herself.

I also wrote at the time it was one of the best Canadiens games I have ever been to. Halak shut the Montreal Canadiens out, but got the belated thanks he deserved. The Bell Centre was subdued by my standards, but my sister had a great time and kept saying how much she loved the atmosphere. I'd really been hoping that game would have been more exciting, but it turns out that it was enough.

My favourite game from 2012 was the first hockey game my sister and I went to together, and the day she finally got what I meant.