Which Montreal Canadien Wore It Best: #24

Share All sharing options for: Which Montreal Canadien Wore It Best: #24 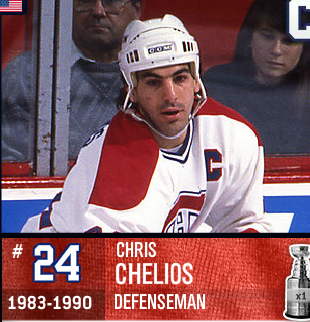 A standout rookie with the Canadiens in 1984-85, Chelios wracked up a ridiculous 64 points. The 6'1" defender was far from just an offensive dynamo though, quickly becoming an elite NHL defenseman on both sides of the puck. And as if that wasn't enough, Chelios' physical game far outreached his frame, often delivering crushing hits at crucial times, and building himself a reputation as one of the game's dirtiest players. His rookie season was the high water mark for him in points until 1988-89, when his 15 goals and 58 assists for 73 points in 80 games garnered him his first of three Norris Trophies. To this date, Chelios is the last Canadiens defenseman to win the Norris. Chelios lead the Canadiens to two Stanley Cup finals, winning in 1986, and leading the team in points with 19 in 21 games in 1989. Unfortunately Chelios' off ice activities lead to the old school and uptight Montreal Canadiens management team trading him to the Chicago Blackhawks, where he would win two more Norris Trophies before moving on to the Detroit Red Wings, where he would win two more Stanley Cups, and play until he was 127 years old. Chelios is a clear cut first ballot Hockey Hall of Famer, and would be inducted already if he hadn't retired so recently. 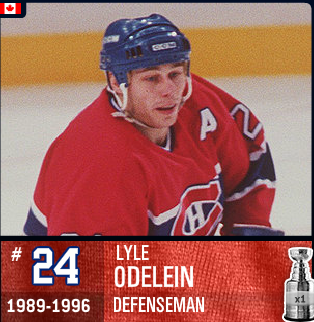 A fixture of the Canadiens blueline in the 1990's, Odelein is most commonly remembered for being a bone rattling hitter and expert shot blocker. You wouldn't guess it from how he played, but Odelein was only 6 feet tall, but the Saskatchewan born farm boy possessed unreasonable strength, which allowed him to be a shutdown defender against players much larger than him. After a great playoffs in 1993 that resulted in a Canadiens Stanley Cup, Odelein had a career year offensively in 1993-94 with a completely uncharacteristic 11 goals and 40 points in 79 games, to go along with a career high in penalty minutes with 276. Odelein was eventually traded to the New Jersey Devils in order to bring Stephane Richer back to Montreal.