Which Montreal Canadien Wore It Best: #27

The number 27 has been worn by thirteen players for the Habs in over a 100 years of history, but only five make it to this list. Who wore it better? Also to wear #27: Marius Czerkawski, Lucien Dublois, Gilbert Delorme, Patrick Kjellberg, Sean Shanahan, Perry Turnbull, Shawn Van Allen, and David Wilkie.

Share All sharing options for: Which Montreal Canadien Wore It Best: #27 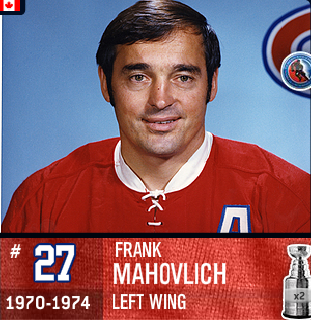 Dubbed, "The Big M" partly due to his younger brother Peter also being an excellent hockey player, Frank Mahovlich was one of the NHL's best players over the course of his career. Mahovlich was significantly over a point per game over his 3.5 seasons with the Canadiens, wracking up two 90+ point seasons, and hitting the 30 goal mark 3 times. Mahovlich also won two cups in his short tenure with Montreal. 2 of his 3 full seasons in Montreal, Mahovlich would lead teams full of hall of famers in points. Mahovlich hit his career high in 1971-72 with 96 points and 43 goals while wearing the Bleu, Blance, et Rouge. 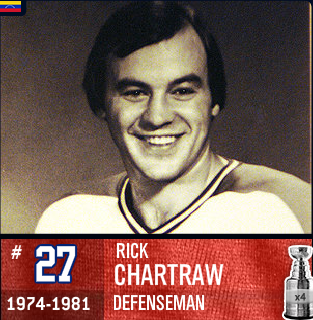 Mostly a depth defenseman for the Canadiens, Rick Chartraw ended up winning more Stanley Cups than any other #27 on this list with 4. The first round pick of the Habs in 1974, he made the team right away and was present throughout the powerhouse 70's teams, and provided a low risk brand of defensive toughness to the blueline whenever Lapointe, Savard, and Robinson were on the bench. Unfortunately the offense he showed in the OHA in his draft year for the Kitchener Rangers never really translated to his NHL game. Chartraw also represented the USA in the 1976 Canada Cup. 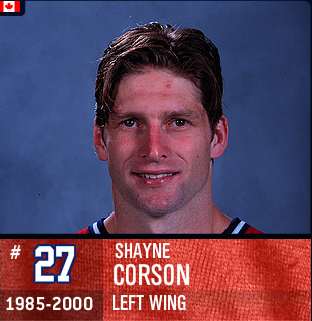 Another first round pick of the Canadiens, this time 8th overall in 1984, Corson quickly identified himself as a fan favourite with bone-rattling checks, solid offensive numbers and a style of play that showed no quit. His rough and tumble style of play took a physical toll on his body, preventing him from ever playing a full season with the Canadiens, but his contributions were valuable when he was able to suit up. Corson never won a cup with the Canadiens, unable to break into the lineup fully in 85-86 and traded to Edmonton in a package deal for star forward Vincent Damphousse before the 92-93 season. In the 1996-97 season, Corson was reacquired by the Habs and it lead to his career being reinvigorated. His 21 goals and 55 point season in 1997-98 got him an invite to join Team Canada at the Olympics in Nagano. Corson always elevated his game as a Canadien, 423 of his 693 total points in the CH (61% of his points) in just 662 of his 1156 career games (57% of his games). 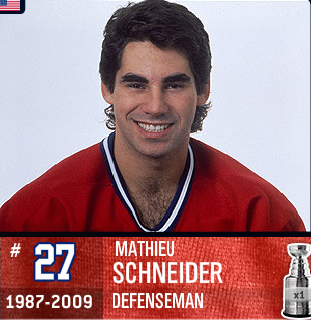 One of the star young defensemen for the Canadiens during the 1993 Stanley Cup run, along with yesterday's champion Eric Desjardins, Mathieu Schneider was a smooth skating offensive defenseman with a bullet shot. Schneider eclipsed the 10 goal mark three times from the blueline for the Habs in four full seasons. After another good start in 94-95, Schneider was traded to the Islanders in exchange for Pierre Turgeon (coincidentally Pierre Turgeon was the key piece in reacquiring Shayne Corson in 1996). Late in his career, Schneider was acquired near the trade deadline by the Canadiens to augment a struggling powerplay in 2009, as the departure of Mark Streit had left setup man Andrei Markov without a shooter. More than augment it, Schneider blew up for 17 points in 23 games before getting injured right before the playoffs, along with Andrei Markov. 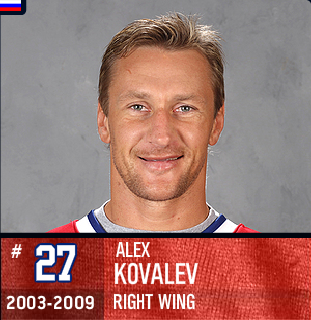 Acquired for quite literally nothing (sorry Jozef Balej) from the New York Rangers in the 2003-04 season, Alex Kovalev lead the Canadiens to a 1st round upset of the hated, stupid Boston Bruins. Given the moniker "L'Artiste" by adoring Bell Centre fans, Kovalev became a fan favourite right away due to his dazzling skill and flowing blonde locks. Enigmatic is often a term applied to Kovalev, but although he never really delivered on the promise of his absurd skill level, he was a player who could take over games and play all situations. Kovalev has great ups and downs in a Habs jersey, from his constant "fake" interviews with Russian media that engendered discord in the dressing room, to scoring the tying goal against the Rangers in the greatest comeback in team history. But that is Kovalev, he's tantalizing, disappointing, enraging, brilliant, and dominant. He can bring you out of your seat or make you slump into it, annoyed at his antics.