Which Montreal Canadien Wore It Best: #28

The number 28 has been worn by eleven players for the Habs in over a 100 years of history, but only two make it to this list. Who wore it better? Also to wear #28: Marc Bureau, Kyle Chipchura, Craig Conroy, Karl Dykhuis, Jean Hamel, Yvan Joly, Michael Polich, Steve Rooney, and Larry Trader.

Share All sharing options for: Which Montreal Canadien Wore It Best: #28 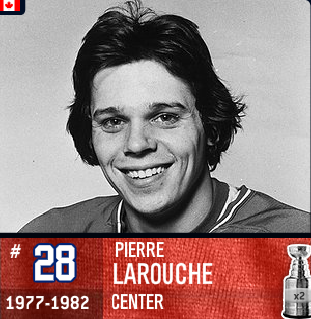 A natural goal scorer, Pierre Larouche was an established top line player with the Pittsburgh Penguins before he was acquired by the Canadiens in 1977, including a previous 53 goal and 111 point season. However when he became a Hab, he would have a rude awakening by the name of Scotty Bowman. A run and gun game giving up as many chances as he got would not due on the powerhouse Habs, so Larouche was a frequent healthy scratch despite putting up good to great numbers. It wasn't until Bowman departed for Buffalo that Larouche broke up as a Hab, putting up 50 goals and 91 points in 1979-80. That play didn't last long though, as he was back below a point per game the next season.

A stud defenseman who found his offensive game at just the right time, Desjardins will always be a lingering star in Habs history for the only hat trick by a defenseman in Stanley Cup Finals history. The goal that completed that hat trick in 1993 was an overtime winner to tie the series with the Los Angeles Kings 1-1, and resulted in one of the most iconic calls of veteran play-by-play man Bob Cole's career. When people think of the 1993 Stanley Cup, they think "10 overtime wins", then they think "DES-JAR-DINS". Desjardins wasn't limited to a moment though, he was a dominant defenseman in the NHL for another decade after winning the cup. Unfortunately most of those years came with the Philadelphia Flyers after a colossally bad trade by the Canadiens that sent Desjardins, Gilbert Dionne, and John Leclair to the Flyers for Mark Recchi and a 3rd round pick.