Which Montreal Canadien Wore It Best: #29

The number 29 has been worn by thirteen players for the Habs in over a 100 years of history, but only two make it to this list. Who wore it better? Also to wear #29: Jesse Belanger, John Chabot, Brett Clark, Jim Cummins, Ron Flockhart, Patrick Lebeau, Gino Odjick, David Orleski, Yves Racine, Darryl Shannon, and Gilles Thibaudeau.

Share All sharing options for: Which Montreal Canadien Wore It Best: #29 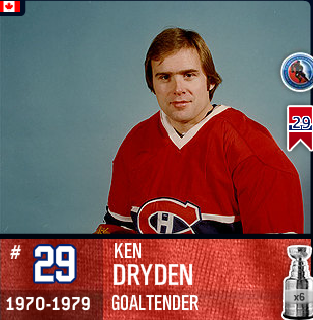 There isn't much to say about Ken Dryden that hasn't already been said. He was the goaltender for perhaps the greatest decade in Canadiens history, and represented Canada in the most important and iconic international hockey tournament of all time. A 6 time Stanley Cup winner, Hall of Famer, and with his number retired in the rafters of the Bell Centre, there aren't many honours Dryden hasn't won. Dryden won the Conn Smythe Trophy as a rookie in the playoffs, but won the Calder Trophy the following year. He won 5 Vezina Trophies, including 4 straight to end the 1970's. He has the best winning percentage of any goalie to play a significant number of games in NHL history. His list of accolades is nearly as long as his speeches. What's perhaps the most impressive of all these accolades, is that Dryden did this while only playing 8 NHL seasons, taking off the 1973-74 season to complete his studies as a lawyer, and retiring early. After only 509 NHL games played including playoffs, Dryden remains one of the most iconic figures in the sport's history, his resting stance still emblazoned in the minds of fans who haven't even seen him play. 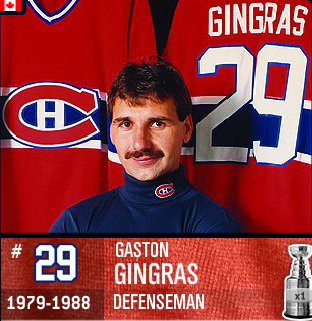 Gaston Gingras has the unlucky duty to be the guy who played enough games that he qualifies to go up against Ken Dryden. A rookie the year after Dryden retired, Gingras began his Habs career at the end of an era. After a few years of bouncing around the minors with both Montreal and the Toronto Maple Leafs, he won a Calder Cup with the then minor league Habs affiliate, the Sherbrooke Canadiens, alongside upcoming players like Patrick Roy and Stephane Richer in 1984-85. The following year Gingras would score 5 points in 11 games en route to his first and only Stanley Cup.