A later start today, but there will be a Bulldogs scrimmage tonight.

After an early start to the day yesterday, the Bulldogs had most of the morning and afternoon off. There will be a third scrimmage tonight as Team White and Team Red get set to square off again.

So far Team White has won both games in Sherbrooke, so Team Red is looking for a big win tonight.

Derek Wills, the Bulldogs' play by play man in Hamilton tweeted the lineups for today's scrimmage as follows: 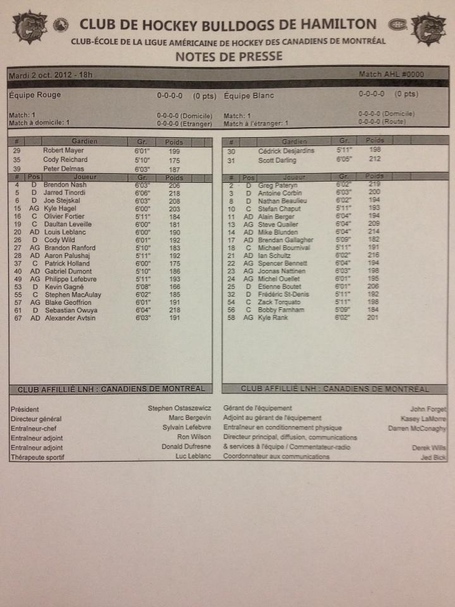 Team Red seems to have a distinct advantage with a top line of AHL veterans in Aaron Palushaj (who returns to the lineup after being out briefly with an injury), Louis Leblanc, and Blake Geoffrion, while Team White has the superior goaltending with Cedrick Desjardins in net.

We don't have a live stream for you today as Abe Hefter isn't able to get one up, but he says he will have one for tomorrow.

Keep your eye on: #56, 5'9" Bobby Farnham of Team White, who's drawn some rave reviews from media in attendance for his skills and effort so far.