Share All sharing options for: Habs Two for 2012 with 3-1 Win over Lightning

Sometimes Ron MacLean comes up with some good ones, I gotta give him that. "Tonight protesters in Quebec got their Cunneysworth,"was how the HNIC anchored closed out coverage of the Montreal Canadiens 3-1 win over the Tampa bay Lightning.

As protesters camped out in anger against the uni-lingual Habs bench boss, Cunneyworth stuck to his game plan. It paid off.

With Brian Gionta returning to the lineup, Cunneyworth opted to scratch fourth-line center Petteri Nokelainen, the team's top face-off man, and went with three centers. It was certainly a bit of a head scratcher, but the remaining centers (Tomas Plekanec, Lars Eller and David Desharnais) went a combined 54 percent against their opponents. 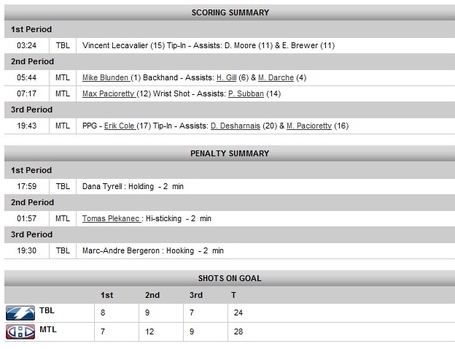 Nothing unsual in the first goal of the night, the typical early first goal by the opposition at 3:24 of the first period. At first it ws credited to former Hab Dominic Moore, but the tip in was later given to Vincent Lecavalier. It would be the only blemish on the recored for Carey Price, who made 23 saves on the night.

The Canadiens took charge in the second period, with a pair of goals in the opening minutes. On an aggressive fore check, Mike Blunden, often under the microscope for the recent increase in TOI buried his first goal in a Habs uniform at 5:44. The Canadiens fourth liner was born in Toronto, but grew up uni-lingual in West Montreal. Given the events of earlier in the day, Cunneyworth must have felt some sort of redemption in the tying goal.

Blunden gave some praise to the new coaching approach being given by Cunneyworth, post game. "We're a little more upbeat on our fore check. We play four lines and we've been working really hard of late," he said.

A minute and 33 seconds later, Max Pacioretty shook the monkey off his back with his 12th goal of the season. The play was set up by a perfect clearing pass from P.K. Subban.

The game was a relatively whistle-free evening, with a combined three minor penalties called against each club. The Tampa power-play, dead last on the road, showed just that with Montreal's Lars Eller getting the best scoring chance on the their only power play.

It appeared that Eller kept his scoring magic from Wednesday night going in the second period, but the goal was called off immediately. Even Eller didn't try to sell the fact that his attempt to stop the puck in front of the Tampa net resulted in a kicking motion.

While Eller didn't register a goal on the night, he and his line-mates (Travis Moen, and Andrei Kostitsyn) were given the task of shutting down the Lightning's top line.

"We did the little things tonight that were important," Cunneyworth said. "Eller's line was against a pretty impressive trio, and they did a good job against that line. Lars is very reliable in his own end. We know Moen's battle and his respect and Kostitsyn is coming into his own on that line."

Erik Cole added a power-play goal with 17 seconds remaining in the game, to put another notch in the Canadiens and Cunneyworth's win record.

Cunneyworth also acknowledged the protest, saying he was unaware of it until just a couple days prior. "That's their prerogative, but I didn't give it much more time to it. My focus was on the game."

Price also commented on the protest, of which 200 people reportedly attended."I'm sorry that I'm not a francophone but you know I'm just here to try and do my job I'm not here to do anything else," the Canadiens netminder said. "Everybody's entitled to their opinions so I can't really say much about it. "We're all brought here by management and we're just trying to do our job."

Wearing a cage, after a shot ot the face in practice on Friday, Alexei Emelin continued to be a hitting machine, laying out the body seven times on the night, He should also get a non-hit credit, after Steve Downie found himself bouncing off the Russian Tank after an open-ice hit attempt. Emelin was with his head down, and in skating stride on the impact and didn't even budge.

The Canadiens are now at the midway point of the 2011-12 NHL regular season. Their record sits at 16-18-7, seven points back of eighth place. They continue their home stand Tuesday, with a homecoming visit from Jaroslav Halak and the St. Louis Blues.

Reaction from the 0 for Eastern Canada gang at Raw Charge