The Montreal Canadiens will hope the magic of Wednesday's home thumping of the Winnipeg Jets carries on tonight against the Tampa Bay Lightning.

Despite a disappointing loss in Florida, December 29, home ice should play a big key for the Habs tonight. The Lightning have lost 14 of 23 road games, their most recent was a 4-1 loss to the Ottawa Senators on Thursday.

Special teams have not been great, on the road, for the Bolt. Tampa is 1 for 33, with the man advantage, in their last nine road games and a league worst 8.2 percent this season.

Tampa is also gaining a long list in the injury department. Adam Hall and J.T. Wyman both suffered upper body injuries on Thursday. Wyman is listed as day-to-day, while Hall is indefinite. They join Mathias Ohlund, Ryan Shannon, Ryan Malone and Victor Hedman on the Lightning's list of casualties.

The Lightning, looking to reinforce their blueline corps, picked up Brendan Mikkelson from the Calgary Flames, on Friday. He could play tonight, if Malone is not set to return.

Mathieu Garon gets the start in goal tonight.

Good news for the Canadiens is the return of captain Brian Gionta to the lineup, and practiced with Mike Cammalleri and Tomas Plekanec.

Alexei Emelin took a Yannick Weber shot to the face, during Friday's practice, but appears good to go tonight, The Russina tank was sporting a full cage during the morning skate.

Good deal?: Tomas Kaberle has a goal and eight assists in 11 games with Montreal. He had the same point total (no goals) in 29 games with the Carolina Hurricanes.

Need something to do Sunday aft? Bring your cash and your Habs items, as Carey Price, P.K., Subban , Josh Gorges, and Travis Moen will be doing an autograph signing at AL Creations. 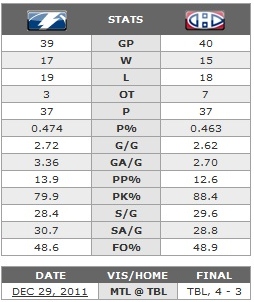