Anyone remember Jan Bulis? You probably do, if you are a Habs history/trivia buff, as the last player to score four goals for the Montreal Canadiens. That was in 2006.

Lars Eller equalled that mark in tonight's 7-2 win over the Winnipeg Jets, and picked up an assist along the way to make it a five-point evening.

You know Lars Eller, right? The key player coming back the other way in the deal that sent Jaroslav Halak to the St. Louis Blues. The player most fans thought would be a big time bust and that Pierre Gauthier had lost his mind. Well the latter of those two arguments is still debatable, but the truth of the matter is the Danish sensation will be a big time player in this organization.

The Jets have not been a great road team and have been tagged for seven goals at least twice previous this season. The Canadiens came out strong in the first period, but a defensive lapse led to the visitors taking an early league when Tim Stapleton was left open in front of Carey Price at 3:41 of the first period.

Montreal replied with a pair of goals in a 43-second span. Josh Gorges apparently has a goal scoring clause in his new contract extension. The Habs blueliner's shot bounced off Tobias Enstrom and past Ondrej Pavelec for his second tally of the season. Eller then began his goal run, firing a wrist shot past the partially screened Jets netminder.

Even before the two Canadiens goals, Pavelec seemed shaky and out of focus. It was just the tip of the iceberg.

The Canadiens made it a dreaded two goal lead in the second period when Tomas Kaberle potted his first goal in a Habs jersey. What? Kaberle can shoot?

Fans at the Bell Centre had to start biting their nails as Blake Wheeler's power play goal cut the lead to one with 2:09 remaining in the second stanza.

If Pavelec was struggling in the first period, the walls came tumbling down in the third as the Eller show took flight. The Canadiens scored not one, not two, but three goals in a 50-second span. Mike Cammalleri sandwiched his ninth of the season between Ellers second and third goals of the evening.

And where was yours truly when this happened? Dropping my kid's friend off at her house. Next time they take the bus!

Just as I plopped back down to take in the game, this happens.

Andrew Ladd tried to cue the comeback with just under seven minutes to play, but it wasn't going to happen.

Travis Moen and Andrei Kostitsyn played an excellent supporting roll to their center, picking up three assists apiece on the night. Moen even had a couple early scoring opportunities right out of the gate in the first period.

Erik Cole ran up a staggering 27:04 TOI, picking up a pair of assists. Alexei Emelin had five hits on the night and really would have liked to drop the boom on Ladd, who punched him in the face in the second period.

The Habs will next face the Tampa Bay Lightning, and hope the home stand and the revived goal song carries further into 2012. Wonder if Randy Cunneyworth gives tonight's First Star any more power play time than the six seconds allotted tonight?

After the game, the team announced that Louis Leblanc has been sent back to the Hamilton Bulldogs (AHL). 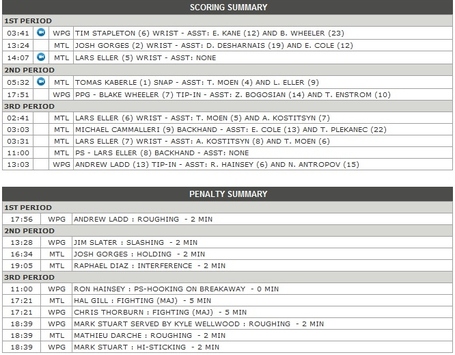 Reaction from the Jets camp at Arctic Ice Hockey