The Winnipeg Jets are soaring at the moment, riding a three-game win streak and coming out of a hot December, where the club went 10-3-1. Much of their recent success can be a attributed to a 9-2-1 record at the safe confines of the MTS Centre.

The Montreal Canadiens will be looking for similar fortune, as they host the Jets for the first time since the club flew the coup from Atlanta. After a dismal close to December, with a 1-5 road trip, the Habs will hope a stretch of six home dates in seven games will turn the team's fortune to a possible playoff berth. Optimism may not be there however, with the team sitting two games below .500 at the Bell Centre.

In their last meeting, a 4-0 Jets win, Blake Wheeler had a three-point night, including the game-winning goal. The Jets winger has a five-game point streak to his name, accumulating seven points, and a point in 16 of his last 20 games.

The Habs aren't the only team with rearguards with wonky knees. Dustin Byfuglien has missed the last three games with a knee injury of his own. Randy Jones (upper body) and Derek Meech (lower body) are also out for the Jets. Bryan Little (foot), is skating with the club, but is not expected back until Saturday at the earliest.

Interesting Jets stat: Patrice Cormier, called up from the St. John's IceCaps (AHL) on Thursday, is perfect in a dozen face-offs in his first two games. Jim Slater is ready to go however, so Cormier won't dress tonight.

Brian Gionta skated in practice with the team Tuesday, rotating off the fourth line, but is not expected to be ready for tonight. The Habs captain has missed 10 games with a groin injury, and is hopeful for a Saturday return.

Randy Cunneyworth made further tweaks to his lines over practice on Monday and Tuesday, with Chris Campoli likely on the wing in place of Louis Leblanc. Does his rotating forwards, game in/game out, remind you of anyone recent? 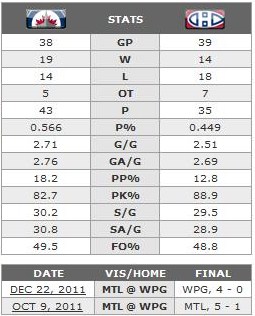