The Team That Wanted It Got It: Habs Fall to Sabres 3-1

Share All sharing options for: The Team That Wanted It Got It: Habs Fall to Sabres 3-1

Despite being a struggling team in the 2011-12 NHL season, the Buffalo Sabres best asset could still be head coach Lindy Ruff.

Ruff is arguably one of the best game coaches in the NHL, when it comes to reading and adjusting to a game situation, as it progresses.

Another example was demonstrated tonight with the Sabres 3-1 win over the Montreal Canadiens, but it wasn't as difficult a night for Ruff as usual. The Sabres bench boss quickly adapted to Randy Cunneyworth's two-man fore-check system, and practically nullified any offense in the process.

It was easier for the Sabres that the Canadiens players, with the exception of a small group, seemed to be doing a lot of watching, and not as much skating as the game wore on.

The Sabres dominated the game for 60 minutes, with the Canadiens relying on Carey Price to keep it close. The Habs goaltender, back from the All-Star break, began a bit shaky but finished the night with 37 saves.

In a situation where the Canadiens need every point available to even consider a playoff spot, a win tonight against the Sabres was a must win. They didn't get it.

The Canadiens were out-shot 11-8 in the first period, but were able to get on the board first. After being hit from behind on the boards just moments earlier, Max Pacioretty got some revenge on a breakaway. The Habs forward got two chances on Ryan Mller, cashing the rebound for this 18th goal of the season at 4:09.

Ville Leino, often scrutinized for his ridiculous contract with Buffalo, tied the game at 4:01 of the second period off an odd-man rush.

Canadiens defenceman P.K. Subban took a tripping call shortly after, that could easily be deemed as a slew foot. The Habs rearguard was fined $2500 for a similar incident already this season against the Pittsburgh Penguins.

You could see the Canadiens slowing down more and more, and Paul Gaustad's go-ahead marker, at 6:17 of the third period, was an excellent example of the glue coming undone. The Sabres were openly allowed to skate around and in front of the Canadiens net unattended, allowing Brad Boyes to find Gaustad in front of the crease.

Patrick Kaleta added an empty net goal at 19:08 to close out the scoring.

To add salt to the wound, the Sabres pulled off the win after losing their top player, Thomas Vanek to an upper-body injury in the first period. Vanek was caught in a crunch from Pacioretty and Erik Cole, while making a move to the front of the Montreal net..

The key to tonight's loss for the Canadiens will be how they respond Thursday night against the New Jersey Devils, and perhaps give us a foresight as to what direction they wish to take the rest of the way.

Maybe the timing of the All-Star break knocked the wind out of their sails, where they went 2-0-1 just prior to last weekend. A loss in their first game back, against a team in just as bad a shape as they are, will not be an easy pill to swallow. 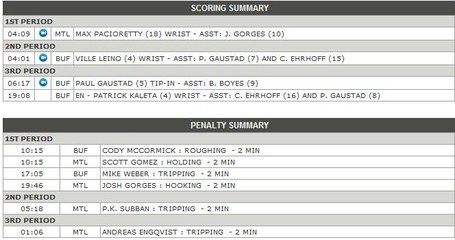 Winning side talk from SBN partner Die By The Blade