Losing back to back games on the weekend, and salvaging one point in two games would pretty much have been the death-nail for the Montreal Canadiens playoff hopes.

Instead they come away with three points, after a 3-1 win over the Toronto Maple Leafs.

Having lost their first two meetings, and coming off a 5-4 loss Friday to the Pittsburgh Penguins, a win at the ACC seemed to be a tough challenge.

The Habs were up to the task tonight, moving up two points while keeping the Leafs at bay in their own chase for a playoff spot.

The Canadiens opened the scoring at 18:26 of the first period when Rene Bourque scored his first goal, in a Habs uniform, snapping a shot over the shoulder of Jonas Gustavsson.

Before the Habs could celebrate though, the Leafs quickly responded. Pressing on the forecheck, Josh Gorges and P.K Subban ere both caught pinching. That left the speedy Matthew Lombardi to move in on Carey Price, tying the game at 18:55.

After a scoreless second period, the Canadiens offense took over scoring twice on their six shots of the period. With ex-Habs defenseman Mike Komisarek giving a perfect screen, Raphael Diaz slapped in the game winner at 3:29.

The Leafs made it intreresting with 11 shots at Price, who held his ground in a 32-save evening.

Lars Eller added an insurance goal at 11:25 to close out the scoring.

The Canadiens power play remains what it was, going 0-for-3 on the night. They were also dominated heavily in the face-off circle by a margin of 41 to 23.

Alexei Emelin cranked out five hits, including a solid one on Joey Crabb, who may have regretted taking a run at the Russian Bulldozer earlier on the night.

The Canadiens now return home, where five of their next six games will be at the Bell Centre. They host the Detroit Red Wings on Wednesday, their lone game before the All-Star break.

Start the trade rumors for either club as Tampa Bay Lightning GM Steve Yzerman was in attendance. 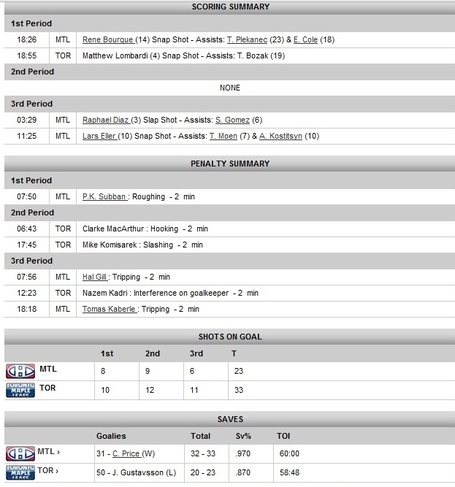 There were lots of F bombs being dropped at Pension Plan Puppets during their game thread, so I can imagine it's getting worse.