Game Thread: Habs Face Yet Another Tough Test Against Washington

Share All sharing options for: Game Thread: Habs Face Yet Another Tough Test Against Washington

The oddities of the NHL's schedule know no bounds as the Montreal Canadiens and Washington Capitals face off for just the first time this season.

With the Caps comes the return former Habs Roman Hamrlik and Jeff Halpern, who both must be thinking they got out at the right time.

The Capitals are coming off of a game last night, but don't expect them to be very tired as they laid down and took it from the New York Islanders last night, getting shut out 3-0 and managing just 17 shots on net. Perhaps they were attempting the Canadiens' 2010 playoff strategy.

The Habs on the other hand are coming off of a solid win over the top team in the Eastern Conference (by record only) after the Desharnais line along with Gomez and Peter Budaj lead them to a 4-1 win over the New York Rangers.

The Habs have only managed back-to-back wins once under Randy Cunneyworth, but the team improves mightily with Gomez in the lineup, even if he's wasted a little bit on the fourth line.

Last season the Capitals went 3-0-1 against the Habs, the only Habs win coming on the back of a 2 goal and shootout goal performance by Brian Gionta as Montreal battled back from an early 2 goal deficit in Washington. Washington outscored Montreal 12-4 in the last season series and shut out the Canadiens twice.

In the continuing confusion of Randy Cunneyworth's interim coaching gig, he keeps throwing Eller into 1st line matchups, only to see him fail as he's not ready for it, and instead of dropping him down the depth chart he benches him. Eller sat out a whole period last game only to be thrown right back out against top line matchups in the 3rd period. And people thought Jacques Martin was bad with youth? It will be interesting to see if Cunneyworth learns from this mistake, or if he throws Eller out against Ovechkin tonight.

The injury list has slowly been getting smaller, but two impact players for the Canadiens are still on the IR. Brian Gionta is likely done for the year after undergoing successful bicep surgery, Andrei Markov is still out for an undetermined amount of time with his knee problems, and Ryan White is nearing return after missing the entire season with a sports hernia.

Interesting note: Nicklas Backstrom was hurt after taking a cheap shot by Rene Bourque (the reason why Bourque was suspended when the Canadiens acquired him), so he may have to pay some sort of trumped up price tonight, probably a fight. 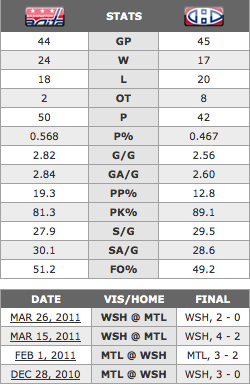 View from the other side at the great Japers' Rink

In the meantime a Habs-Caps rap battle (Feb 2011) from HockeyGods.com