Share All sharing options for: Game Thread: Habs Host Rangers in a Tale of Two Cities

The visitors, the New York Rangers, are first in the Eastern Conference with 60 points and 8-2-0 in their last ten games follwing Saturday's 3-0 shutout of the Toronto Maple Leafs.

The Blueshirts are second in the league in goals against, and are fifth in five-on-five for/against. They are sixth in the penalty kill department, just four spots back of the Canadiens. Playing with the man advantage, they aren't overly spectacular, but compared to tonight's home team that's not likey a concern to them.

If the Canadiens have any hope of a win tonight, they better come out fast. New York is a league best 20-1-1 when getting the first goal, and are 7-1-1 when leading after 20 minutes. Any chance for a rally, if down after two periods is very unlikely as the visitors are 17-0-2 when ahead after 40.

Martin Biron picked up the whitewash Saturday night, and is 9-2-0 in the season, so expect Henrik Lundqvist to get the start tonight. A feature on Biron's roll with the club from NHL.com.

Ruslan Fedotenko left Saturday's game with back spasms, and will be replaced in the lineup by Kris Newbury.

The Canadiens? Well we're all aware of the situation in Montreal. With 40 points in 38 games, the Habs will need to seriously rack up the points for any chance of a playoff run. Three point games are unacceptable at this point.

The Canadiens won their last meeting, in a 4-0 decision.

Rene Bourque has two goals in five career games against the Rangers, and makes his Habs debut, starting on the left wing with Tomas Plekanec and presumably Mike Blunden. Olivier Bouchard gives his analysis of the newest Habs forward.

Scott Gomez will center Mathieu Darche and Petteri Nokelainen, but could rotate into the Plekanec line as coach Randy Cunneyworth did not give a final set up this afternoon.

For those wagering on the over/under for defencement dressing tonight, the number will be six.Cunneyworth met the media this afternoon and his d-pairings will likely be a game-time decision.

Oh and Pro Hockey Life must know something. Look who's jersey in on the clearance page. 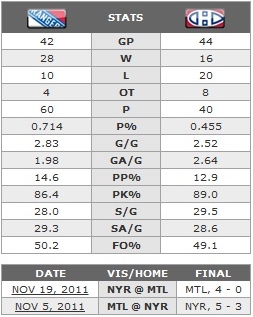