Share All sharing options for: Habs Still Losers, Fall 3-2 in Shootout to Sens

The Montreal Canadiens continue to slide toward the NHL lottery pool, but at least tonight they salvaged a point, in a 3-2 shootout loss to the Ottawa Senators.

Montreal dominated the Senators through most of the game, out-shooting their opponent 21-13 through forty minutes.

Unfortunately the Craig Anderson they faced on December 27 was nowhere to be found on this night. The Senators netminder played a solid game, as he has since that night, making 33 saves and shutting down the Canadiens in the shootout.

Carey Price would be busier in the third period, making a total of 22 saves in a losing effort.

The Canadiens goaltender summed up the team's struggles post game. "I think we deserved better, but we can't keep using that one," Price said. "So I don't know what to say anymore."

The game was scoreless through 40 minutes and both teams were hampered on the power play for most of the night, with the Canadiens going 0 fro 5 and the Senators 0 for 4 after two periods.

The Canadiens struck first, just 42 seconds into the third period. With Max Pacioretty serving a slashing penalty, Tomas Plekanec managed to squeeze out on a partial break away. It's been seen many times this season, disappointing results, but this time around the Canadiens center cashed in on the opportunity.

The Senators replied at 5:57 when a Sergei Gnnchar point shot deflected off the stick of Kyle Turris, a welcome addition since being acquired from the Phoenix Coyotes, to tie the score.

Ottawa's power play finally connected at 13:14, when renowned Habs killer Jason Spezza blasted a shot past Price. At the time, Plekanec was serving a double minor for high-sticking.

The game appeared sealed after that, but the Canadiens kept the positivity alive.

With Price pulled, Max Pacioretty was sitting on the doorstep to fetch a rebound, off the point shot of Chris Campoli, to tie it up with 39 seconds remaining. If you didn't know better, you'd think the Canadiens had won a playoff series with the goal, by the way they piled on Pacioretty. That or maybe Scott Gomez had scored.

The Canadiens had salvaged at least a point, but certainty on a win was uncertain with Josh Gorges in the penalty box for the first 1:28 of overtime. The Habs defenders stood their ground, stopping the Senators of seven of eight power play chances all night, and managed some opportunity the other way. They would be unable to solve Anderson.

With the Canadiens at a futal rate in shootout attempts, Randy Cunneyworth went with another outside the box mentality. Lars Eller, yet to make a career shootout attempt but likely given the chance with his penalty shot goal last week, was unsuccessful. Then there was a semi-head scratcher in Tomas Kaberle, who had some success with the Toronto Maple Leafs, but had yet to make a shootout attempt on the season. He would miss and so would Pacioretty.

Alfredsson would clinch it, going five-hole on Price. The Canadiens are now 1-6 in shootouts, managing four goals on 21 attempts.

The Canadiens will have to quickly get this disappointment out of their heads, as they host the New York Rangers on Sunday evening. The Blueshirts are coming out of Toronto with a 3-0 win over the Leafs, Saturday.

Peter Budaj will get the call in goal for the Canadiens, and Rene Bourque will make his Canadiens debut.

Of note, the Habs are 0 -1/3 -1, since Mike Cammalleri was dealt to the Calgary Flames. He scored the first goal for Calgary tonight, 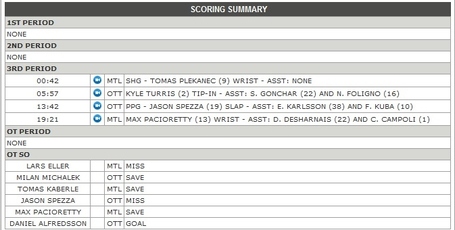 Scott Gomez made his return, after missing 21 games with a groin injury. He played 16:46 (5:02 on the power play), had one shot blocked and didn't take any face-offs as he played the wing tonight.