Well here's a positive. The Montreal Canadiens have beat the Ottawa Senators in their first two meetings this season.

Even better news is that one of those wins came under Randy Cunneyworth, a 6-2 victory on December 27. Then again Craig Anderson completely wet the bed in goal that night and Alex Auld wasn't much better in the supporting role. Carey Price had to make 33 saves, in a First Star effort, to preserve a win.

Oh and Mike Cammalleri had three points against the Sens in those first two meetings, including the December game-winner. Just thought it was worth pointing out.

The Senators 6-2 loss to the Habs was the team's only regulation loss in their last 13 games, dating back to December 16, where they have gone 10-1-2. That run has vaulted them into fifth place in the Eastern Conference.

Opponents do get their chances against Ottawa, who are last in the East in shots against (31.6), and 14th in the conference in goals against per game (3.16).

Their positive spin is their goal production, seventh in the league (3.06 g/g). The Senators are also another opponent that knows how to protect a lead. They are 8-1-2 and 11-1-1 when leading after the first and second period respectively.

Ottawa rearguard Erik Karlsson has has 17 points and is a plus-15 in his last 12 games. His All-Star Game bound teammate Jason Spezza is seventh in the league in scoring and has 55 points in 46 career games against Montreal.

Despite getting rattled for four goals on seven shots in his last outing against the Habs, Anderson has gone 7-0-1 with a 1.63 goals-against average since then.

While Cammalleri is gone to Calgary, and Brian Gionta's season is all but officially done, it appears that Scott Gomez will have the green light tonight. The Habs center practiced in Cammalleri's spot, alongside Tomas Plekanec and Mike Blunden, during Friday's practice. Erik Cole will rotate in on the right side on the power play and occasional even strength shifts.

Rene Bourque skated took part in this morning's optional skate. Video of that, and his first visit with the MOntreal media, after the jump 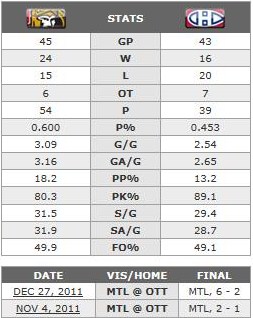