Game Thread: Habs vs. Bruins - You Know the Rest

Share All sharing options for: Game Thread: Habs vs. Bruins - You Know the Rest

It's the Canadiens last visit to the Boston Bruins for the 2011-12 NHL season. Yes, the last regular season visit and with the latest injury to Brian Gionta, a playoff meeting may be non-existent.

After a pair of wins against two struggling clubs, the Canadiens played were schooled by the St. Louis Blues on Tuesday night.

Good news is that they can beat the Bruins, having done so in their first two meetings. The defending Stanley Cup champions took the last two.

The boys from Beantown will have to make to without Brad Marchand, who is serving the second game of his five-game suspension for submarining Sami Salo on Saturday.

Marchand's absence aside, this team is loaded with talent. David Krejci has 14 points (nine goals) in a nine-game point streak. Tyler Seguin mounted the Bruins comeback Tuesday, against the Winnipeg Jets, has seven points in five games. Patrice Bergeron has four goals and four helpers in his own four-game streak, while Nathan Horton has five goals in his last four games.

To beat the Bruins, the Canadiens may want to frustrate them as much as possible. The Vancouver Canucks managed that on Saturday, but then again their hate for each other might be worse than one of hockey's oldest rivalries.

Scott Gomez made the trip to Boston, so he could be in the lineup tonight. Yannick Weber is also expected back in the lineup, after working on the power-play during Wednesday's practice.

Mile Cammalleri;s pre-game response to last night after the jump

His teammates, including Hal Gill and Max Pacioretty acknowledged that they spoke to Cammalleri during today's practice. You can catch what Cammy said to an inquiring media member on what was said at the start of HIO's audio. 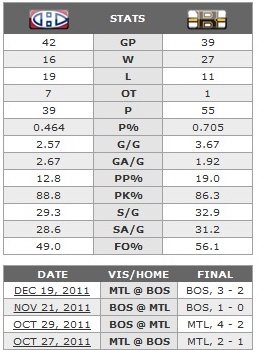