Price vs. Halak. The Return.

Share All sharing options for: Price vs. Halak. The Return.

Time to break out an old gimmick to look at last night's return of the prodigal son.

Unfortunately the return involved the Canadiens treating Halak more politely than any time during his Canadiens tenure. I still believe that the Price vs. Halak debate is going to bubble up and I wouldn't be surprised if it is sooner rather than later based on the perfect ingredients brewing in Ken Hitchcock's pot.

The 2011 season was humbling for Canadiens fans who were loyal to Halak. He struggled during his original tenure as a starter with the Blues. After spending his spring posing as Moses holding the tablets, the expectations placed upon him were highly unrealistic.

Halak also found himself in an environment in which his team was hurting his performance. In a shot quality study conducted by Michael Schuckers from Statistical sports consulting he concluded that

Among those with over 1000 shots faced, Halak had to face the most difficult set of shots, on average.

I wouldn't conclude that this is 100% accurate because it is a basic shot location/probability exercise and there are greater factors that determine the quality of a shot, but it is much more reliable than your basic every shot is 100% equal model that 99% of fans base their opinions on.

Without advanced stats, comparing Halak's career stats with 2011 made the Price deal look even more like a steal and fans put their knives back in their drawers and moved forward.

With wins being a team based stat, it is easy to identify how simplistic goaltending analysis has become. A lower GAA and a better shutout ratio was virtually ignored because of a drop in SV%. With expectation screaming for a repeat of 2010 Jaro looked like a disappointment. He wasn't. Same goalie, poor environment, different expectations.

After a disastrous start to 2012 the best thing for Jaro's resurrection occurred. Ken Hitchcock.

When Hitchcock was hired, I immediately e-mailed the EOTP crew and offered up that we might be about to see the resurrection of Jaroslav Halak. With the Habs struggling and Price's job getting more difficult by the day and with it a declining SV%, I think we are about to have the tape removed from the muted Halak fans.

The whole point of the original series of breakdowns was pointing out that we needed to dig deeper for a better perspective of what was occurring during the 2009-10 seasons. Forcing fans to look past surface level analysis is something that we still battle to do to this day at EOTP. It isn't a stretch to point out that the majority of fans use one stat to determine a goaltender's worth. That stat in my mind is one of the most flawed stats in sports and was on full display last night.

If we look at the shot clock alone we are left with 25-19. Fairly close. How about adding in misses for Fenwick purposes? 35-31. Corsi? 53-43. All numbers that don't really identify the dominant Blues performance last night. Remove the late powerplay when the game was already decided and the numbers were even closer.

If we peel back the onion the story becomes clearer. 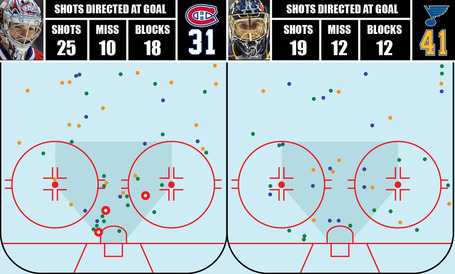 Looking at the shot chart, it doesn't really look all that lopsided. Plenty of dots, fairly well balanced. If writing a column based on the highlights and this alone, we get the narrative that Halak walked into the Bell Center and stymied the Habs by setting the tone with an early breakaway save.

Add in the second layer provided by Olivier over at En attendant les Nordiques and we get a little more clarity. 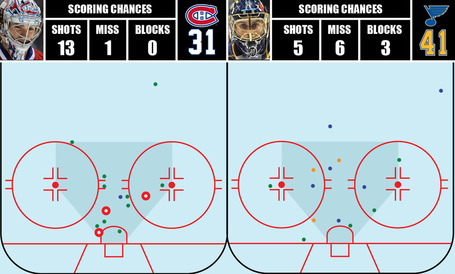 Removing all the excess data from shot locations with extremely low success rates, we are provided with a clearer picture of what transpired last night. Although both goaltenders faced 14 scoring chances, we see that Price was forced to record a save on over 90% of them. Of Halak's 14 registered chances he was only required to put leather on about one quarter of them. Only four of the Canadiens scoring chances were the result of a registered shot and as much as I would love to credit Halak with great depth and angle coverage, the Canadiens, Mike Cammalleri in particular, were spectacularly inaccurate.

This layer is totally absent in any metric based stat you can find. Nobody tracks rebounds or shots immediately preceded by a pass. This is why save percentage is extremely flawed. Watch any great passing center and the second they hit the blue line they begin to move laterally. Watch any shootout and it is the primary reason that the shooter will break wide and cut to the net late. They are attempting to alter the goaltenders angle and possibly gain an angle advantage. The ability that separates the average from the elite is usually recoveries. The lockout removed the Robert Esche's and the John Grahame's of the game because of the increased lateral focus. 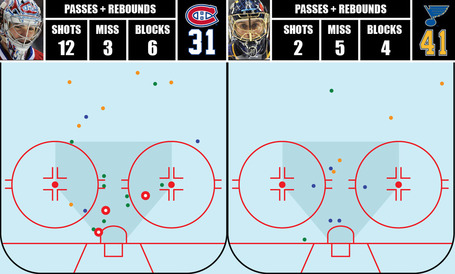 In 1985 it was not out of the question to score off the wing with a goaltender set and on his angle. In 2012 allowing a goaltender to telescope out and not worry about a backside recovery or a reckless rebound results in Brian Elliott going from a career .901 SV% to a .940 and likely All-Star appearance.

Last night Carey Price faced 21 shots in which he was forced to set and re-set in transition or recover from a rebound. All three goals were a result of either a rebound that was not scooped up by his defense or a lateral pass that left him in recovery mode. Jaroslav Halak did not have to deal with defensemen not picking up rebounds or one shot preceded by a pass that took place within the home plate area. Every major lateral transition resulted in a blocked shot or a miss of the net.

The Blues were spectacular last night at puck pressure and removing the Canadiens time and space. The Blues bottled up the passing lanes and made Halak's life simple. Outside of the early breakaway and the Tim Thomas like sprawling save on Mathieu Darche, Halak could have completed the win dressed in a speedo and sandals.

After witnessing the Blues last night I am convinced that Halak is on his way to a .920+ SV% this season. After watching the barrage of high quality shots that Price is exposed to on a nightly basis I wouldn't be surprised to see him settle in at the .910 mark that he finds himself around today. Considering that the Canadiens fanbase jumps from scapegoat to scapegoat with the same frequency George Clooney does models, I wouldn't be surprised to hear Halak's name more frequently as they continue to struggle.

The History of Price vs Halak