The Canadiens enter the second half of the NHL regular season, hosting the St. Louis Blues.The Canadiens are perfect in their first two games of 2012, and play the first of four games in a six-day span.

For some reason, outside of the lone match-up between the two clubs this season, this visit from the Blues has some significance to it. What is it again?

Oh of course. Alan Walsh's meal ticket, from the summer of 2010, makes his long awaited return to the Bell Centre. A full season and a half of hockey has past since Jaroslav Halak carried the Habs through two exciting rounds of the playoffs, before they eventually bowed the the Philadelphia Flyers in the Eastern Conference Final.

Halak did have a chance to face his former team last season, a 4-1 win over Carey Price and the Canadiens in St. Louis.

Outside of tonight's game, Walsh hadn't had much to pipe about his client this season. After a reasonable debut season with the Blues, Halak got off to a 1-6 start (3.53 GAA, .835.SvPct) this year, and found himself losing the starting job to Brian Elliott. But just in time for his return to Montreal, Halak has picked up the pace, going 6-0-3 in his past nine starts (1.95, .929.

And yes to appease the masses of Montreal, coach Ken Hitchcock has confirmed that No. 41 will get the start in goal. This despite the fact that the Blues bench boss typically rewards goalies, who post a shutout, with the next start. Elliott blanked the Avalanche on Saturday with an easy 15-save whitewash.

Goaltending has been a key, if not the ingredient to the Blues' record this season. They sit fourth in the Western Conference, but they are 18th in goals-for per game.

David Backes leads the team in scoring with 29 points.

Expect the same lineup tonight for the Canadiens, provided Max Pacioretty has returned from nursing the flu. The Habs forward, fresh from getting the monkey off his back on Saturday, missed Monday's practice. The injured Scott Gomez took his spot in practice, but is still not ready for game play. He could be available later in the week.

Carey Price gets the call in goal for the Canadiens. Despite knowing what Halak did for the team in the past, Price points out that it's just not a game between goalies. "There’s a bit of a build up for this match-up for sure," Price said Monday. "But at the end of the day it’s the Blues versus the Canadiens and not me versus him."

Brian Gionta has nine points in nine career games against the Blues. Mike Cammalleri has 19 points (11 goals) in 23 games against St. Louis, but just a single goal in two games as a member of the Canadiens.

Interesting fact: The Canadiens managed one goal against Jaroslav Halak in their 4-1 loss last March. The three players who figured in on the goal (Jeff Halpern from Paul Mara and Alexandre Picard) are no longer with the team. 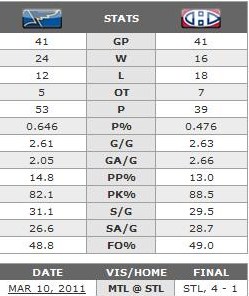 P.S. I can think of better former Habs goalies, who have returned to face them, wearing a Blues uniform. 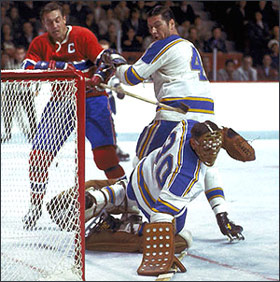