Are the playoffs a realistic possibility?

Share All sharing options for: Are the playoffs a realistic possibility? 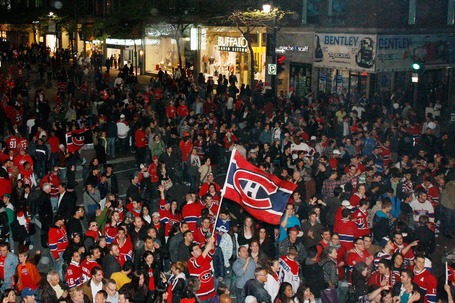 Can the Canadiens make the playoffs?

The emotional response is YES! Did you see Lars Eller the other night? We are back baby!

The rational response is "in order to qualify for the playoffs, the Canadiens who are a .470 hockey team need to play like a .650 team and this is not going to happen".

I have issues with both responses.

Number one is drunk with euphoria.

Number two makes the mistake of assuming that the 2012 Montreal Canadiens are a .470 hockey team because that is what they have accomplished through 41 games.

I learned a harsh lesson during the 2007 season. I used this flawless logic to determine that the Canadiens playing .616 hockey through Jan 9th, couldn't possibly be caught by the Maple Leafs. In order for this miracle to occur, the Canadiens would have to finish the season below .500 (.474 to be exact) and the Leafs who were a lowly .500 club would need to morph into a .618 hockey team. We all know how the titanic battle for 17th place ended.

I mentioned earlier this season that I view the schedule as 82 separate two point events. When injuries, luck and strength of schedule are factored in, a half season sample is not enough to determine the ultimate account of what a team is.

Proof? Using shrpsports.com I used Jan 9th as a cut off date and went through the last 4 seasons. Here are some of the massive discrepancies between first and second half results.

Since 2008 over one third of the league suffered a massive fluctuation (+/- .100) in winning percentage when comparing the first and second half. Look at last season. If viewed with the perspective that the .286 Devils were actually a sub .300 team, then imagining them finishing the season playing .713 seemed impossible. The problem was that in October McKeens Hockey viewed them as a .640 team. In December everybody picked up collective amnesia and based their opinions on the immediate results. Playing .713 seemed ridiculous in contrast to .286, but not so extreme in regards to the pre-season expectation three months earlier.

Is it accurate to perceive the 2012 Canadiens as a .470 team? Three months ago I believed that this was the best collection of talent the Canadiens have had since 1996. Even if we place the expectation level at equal to 2011, then the belief is the Habs were a .585 team in the pre-season. Is it a great leap for them to go from .585 to .650? Over 41 games that is three extra wins.

Is that as improbable as the 2000 Canadiens? How could a team that won 12 of 41 games possibly turn around and win 23 of 41 in the second half? Huge discrepancies in performance are not uncommon for the Canadiens over the last decade. It is almost the norm for this franchise since 2000. Only three of eleven seasons since 2000 have resulted in a winning percentage swing of less than .050. Almost half have resulted in massive swings of .100 or more. Collapses and surges included.

Viewing these types of numbers indicates to me that it isn't as improbable as the surface data would indicate.

All of the factors that could lead to a second half surge are there. The Canadiens are not really as bad as their record indicates. They have failed to maintain their third period leads and if the shootout hadn't been such a disaster, they would be much closer to a playoff spot. Their fenwick percentage was outstanding for two months, but the results never materialized. A healthy team for 30+ games could produce the run that is needed to produce a playoff spot.

I understand the basic logic and rationale of doubting their ability to produce at 100+ point pace, but recent history has proven that this is not an uncommon occurrence. The Habs need to keep it close through January until Markov returns. If they can do that, the playoffs are a strong possibility.

Would I bet on it? No. I am not placing one cent of my hard earned blogging pennies on the health of Markov's knees, nor am I placing it on a team that has been giving Mike Blunden 10+ minutes per game.

History does indicate it isn't as improbable as many think.