Share All sharing options for: Habs Collectors update: Jacques Lemaire asks too much

A few updates for collectors of Montreal Canadiens autographs and memorabilia updated on a few things.

A few weeks back, I noted the nice roster of former Habs attending the The Toronto Sport Card Expo in November. There have been a couple minor changes since that reporter. Jacques Laperriere is no longer part of Friday's autograph session, due to a scheduling conflict. In his place, "The Little M" Peter Mahovlich will be appearing alongside the already scheduled Mike Keane and Steve Shutt on Friday November 11.

Shutt's former center, Jacques Lemaire, has been canceled by promoter AJSportsworld after the Hall of Fame center reportedly doubled his fee demands, after already making a commitment with the latter. Of course we're only hearing one side of the story, but it's not the first time a pro athlete has screwed over the promoter, and ultimately the fans, as Lemaire joins a list that includes Chris Bosh, Lawrence Taylor and Ed Westfall.

A trio of Habs HOFers are signing both privately and publicly in the GTA, through Frozen Pond. Patrick Roy and Jean Beliveau will be signing privately, with submission deadlines on October 31 and November 1 respectively.

"Le Demon Blond" Guy Lafleur will be making an in-store appearance on Dec  3. Full details on autograph fees, as well as other signings can be found on the Frozen Pond website.

Closer to Habs central, AL Collections has secured Habs of the past and present for the International Collectors Show, October 21-23 at the Pierre Charbonneau Center (Olympic Park). So far Richard Sevigny, Yvan Cournoyer, Chris Nilan and Max Pacioretty are scheduled to make appearances. Details on fees and updates on other Montreal area signings can be found at ALCollections.com.

McFarlane toys will release the first Brian Gionta figure, in a Habs uniform, on October 11. It will be part of their exclusive Canadian Tire series. Here's a peak at it.

P.K. Subban and Jacques Plante's figures will debut in their regular series 28 on the same release date, though several distributors and hobby shops already have cases in stock.

Classic Auctions fall spectacular is roughly a week away, and the memorabilia giant has just announced that the sweater that Bobby Orr wore throughout the 1976 Canada Cup will be up for auction. A photo of the sweater is shown below and a full lot description can be found on this link. 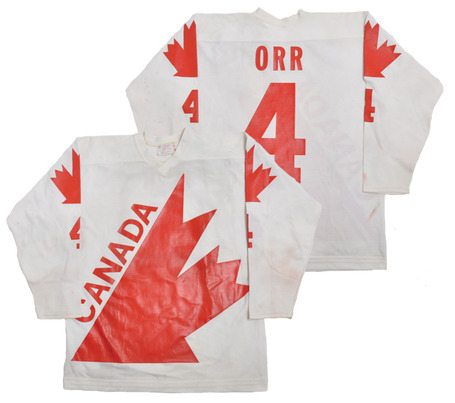