The next time these two team meet, it actually counts. The preseason Montreal Canadiens and Boston Bruins met for the second night in a row, with the Bruins coming out on top 2-1.

Prior to the Jame, Mike Cammalleri was presented the Jean Beliveau Trophy, for his charity and community efforts. The man whose name is on the trophy was on hand to present it to him.

After a scoreless first period, Cammalleri snapped a Philip DeSimone rebound past Tuukka Rask at 15:33 of the second period. The goal was started by a good rush to the net by DeSimone and Alain Berger.

The Habs held the fort until 4:17 into the third period, where Bruins sophomore Tyler Seguin was left wide open on a Boston power play.

Nine minutes later, Max Sauve fed a slick pass to Chris Clark, as a Bruins power play ended, to give the visitors the lead. 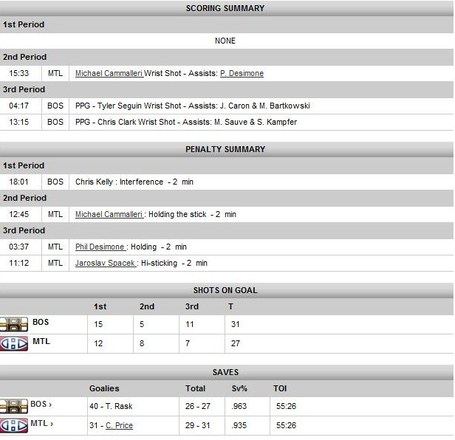 Carey Price is quickly returning to form, and had a great night between the pipes stopping 29 of 31 shots he faced. "Maybe it was seeing a Boston uniform, and it just rolled the clock back a bit," Price said."It's a long camp, and it was only a matter of time before you start feeling good."

Michael Bournival had numerous scoring opportunities. It's a shame his injury limited his training camp time, as I'm sure the Habs would love to give him a better look.

Brendan Gallagher... 'nuff said. As Dave Stubbs tweeted; "Imagine if Habs prospect Brendan Gallagher was named, say, Benoît Gagnon?" To clarify though, the Gazette columnist was merely to emphasize how a kid of this talent would be embraced by Habs francophone fans.

Raphael Diaz played his best game of the preseason, second in TOI to Josh Gorges and getting time playing shorthanded and with the man advantage. In fact most of the young defenders had a respectable outing.

Gabriel Dumont, despite letting Seguin slip behind him, also impressed and led the Canadiens with five hits.

Alain Berger drove the net all night and showed promise of the kind of play he could bring to the Habs in the future. Hamilton will enjoy him this year.

Protect your goalie! Gregory Campbell practically body checked Habs netminder Carey Price, without a call from the official, or any form of retaliation from his teammates. "All I saw was a Boston logo, and I was on my back," said Price He was nearly upended again, this time by Sauve following the Clark goal.

You'd think an AHL bound player would step in for their goalie, but maybe they're entranced by Brendan Shanahan's videos.

Anyone concerned about Jaroslav Spacek?

Other than that the Canadiens played a competitive game, and with just two games of preseason action left, we'll start seeing a more regular roster come Thursday when the Tampa Bay Lightning pay a visit.

After the game, the Habs sent Berger, DeSimone, Philippe Lefebvre and Brock Trotter to the Hamilton Bulldogs. Jarred Tinordi was sent back to his junior club (London Knights). DeSimone remains on a tryout basis with the Bulldogs. Gallagher remains with the club because as coach Jacques Martin said, "He deserves it."