In a truly bewildering move, the Montreal Canadiens have signed 27 year old veteran Chris Campoli to a one year deal worth $1.75 million. Campoli had an underwhelming season last year, split between the Ottawa Senators and Chicago Blackhawks, capped off by sending a pass onto the stick of Alexandre Burrows in overtime of game 7 of round 1 that led to the Blackhawks being eliminated from the 2011 NHL playoffs.

Listed at 6' and 190 lbs and is known as an offensive defenseman even though his career high is just 34 points. Here are Campoli's career stats from HockeyDB: 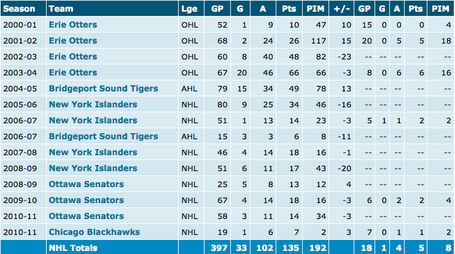 Official statement by the Canadiens:

MONTREAL – Montreal Canadiens general manager Pierre Gauthier announced Monday the signing of defenseman Chris Campoli to a one-year contract for the 2011-12 season. As per club policy, financial terms of the agreement were not disclosed.

In 2010-11, Campoli registered 21 points (4 goals, 17 assists) in 77 games with the Ottawa Senators and Chicago Blackhawks. One of his goal was scored on the powerplay and he tallied one game-winning goal. Campoli served 34 penalty minutes and totaled 84 shots on goal.

A native of Mississauga, Ontario, Campoli was drafted in the seventh round, 227th overall by the
Islanders at the 2004 NHL Entry Draft.

Opinion on the signing after the jump.

As far as depth moves go, I don't get this signing at all. To sign a perennial disappointment like Campoli is one thing, the Blackhawks wanted to retain him after last year in spite of his brain cramp for example. However at this stage in the game I can't support the salary being agreed on. Campoli is worth that salary at perhaps the best of times, but he's been a free agent for nearly two months and there have been no takers. The man has literally zero leverage and he gets perhaps double what the Habs should have paid. I just don't like it.

It's been brought up that perhaps Campoli can help out on the powerplay, but I just don't buy it. His career high for powerplay goals in a season is a whopping TWO. And to make matters worse, last year he only managed two powerplay points season.

I'm usually on the side of management in Montreal as for the most part they know what they're doing, but this reeks of a panic move, or at the very least a lack of patience.

It's pretty clear something is up with the Habs defense for this move to be made at this stage, but it's unclear what it is.

In other news, the Canadiens announced several cuts this afternoon:

Forwards Alexander Avtsin, Andrew Conboy and Dany Masse, as well as defensemen Mark Mitera and Joe Stejskal, and goaltenders Robert Mayer and Peter Delmas have been assigned to the Hamilton Bulldogs.

Canadiens will play tonight the sixth of their eight preseason games hosting the Boston Bruins, at the Bell Centre.

The Hamilton Bulldogs’ training camp will get underway tomorrow at the Bell Sports Complex in Brossard.

Brock Trotter was also put on waivers earlier today in order to send him to Hamilton after tonight's game.

It's looking more and more like Brendan Gallagher might get a shot at a 9 game tryout for the Habs this year. So far it's hard to say he doesn't deserve it, especially with all the injuries up front.