Scott Gomez made his preseason debut, tying the game with the Habs net empty and 37 seconds left in the third period. Erik Cole's shootout goal proved to be the winner.

Things looked shaky in the first period when Zack Smith scored a pair of goals for the Senators in a 1:07 span. Milan Michalek picked Brock Trotter's pocket in the Habs zone to set up the Sens third goal midway through the second.

Pacioretty had a team leading 9 shots on goal, hit the post twice and was taken down on what could have been a short-handed goal attempt. He also scored in the shootout. 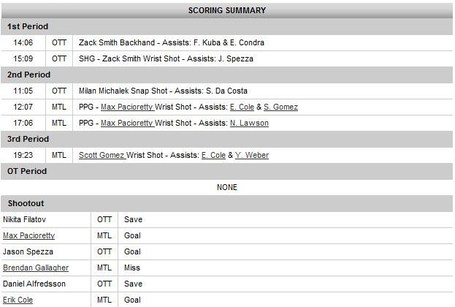 The two teams meet up again Saturday evening at the Bell Centre.

Gomez had a strong preseason debut, also setting up the first Pacioretty goal and playing a strong 22:43 centering Pacioretty and Brendan Gallagher. The trio was the Habs top line on the night.

Gallagher continues to impress, again playing a committed game from start to finish. This kid's agent should shortly be getting a call with a contract offer.

Alexei Yemelin, Jarred Tinordi and Raphael Diaz had a great showing on the point. Yemelin was most impressive on one-one one situations, and Tinordi played a steady game and cleaned Smith's clock. Diaz put up some big ice time, leading the team with 25:07.

Chum was thrown into the troll pool when it was noted that Carey Price’s numbers through 61:04 of preseason action was a GAA is 6.89 and a save percentage of .774. Outside of an aborted poke check, the Canadiens goalie couldn't be faulted tonight, as his support in front collapsed.

Andreas Engqvist was a non factor centering Andrei Kostitsyn and Cole. He's more of a defensive center so that combination was a mystery from the get go.

No anchor on the power play: With P.K. Subban a late decision on not playing, Jacques Martin made some adjustments on the power play by putting Kostitsyn on the point with Yannick Weber. The pair coughed up the puck, allowing the second Smith goal but gradually found some chemistry, and Arpon Basu noted Weber did a great job in containing the puck on the first PP goal. Weber also tallied an assist on the tying goal

The Scotiabank Place fire alarms, sounding throughout the second period, were just a nuisance.

The Numbers Game from canadiens.com