Share All sharing options for: Viggo, Keira and co. lead a hockey and Habs filled TIFF

It's no secret that actor Viggo Mortensen is a huge fan of the Montreal Canadiens. He made an appearance at the team's centennial ceremony in 2009 by introducing Guy Lafleur, and a couple years back appeared at the Toronto International Film Festival (TIFF), wearing his Habs tee.

At this year's TIFF gala press conference for "A Dangerous Method", both Mortensen and co-star Keira Knightley appeared the stage draped with Scott Gomez and Guy Lafleur  jerseys respectively. The stunt was at the expense of Mortensen's friend, director and Toronto Maple Leafs fan David Cronenberg. 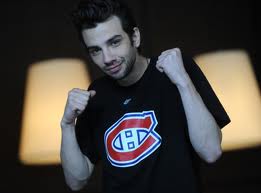 Canadian comedian Ali Hassan appears in both films. Hassan is originally from Montreal, but recently moved to Toronto. Hopefully his hockey team loyalties stayed behind.

The final film is the documentary, "The Last Gladiators" and focuses primarily on the career and post career of former Canadiens tough guy Chris Nilan. Here's a review of the doc from The Hollywood Reporter.

"Making his career with his fists, he aspired to be more than a goon, but ended up as a human train wreck. Black-humoured and brutally candid, Nilan makes an engaging subject as he describes his glory days, and his sad post-career plunge into painkillers, heroin and crime.  But with its detailed focus on his life—other enforcers popping up as talking heads—this is, in essence, an ex-Hab’s rehab movie. And it’s with a warrior romance that, given recent events, seems a bit off key." MACLEAN's magazine on the film The Last Gladiators