The solitary Finn of the Canadiens organization. Nattinen was fairly highly regarded in his draft year and seen as one of the more promising European forwards of his year. He was ranked 10th on the NHL central scouting's list of European skatersAs a result he was the ninth European forward taken in the draft, selected after Anton Lander, Richard Panik and Tomas Tatar and ahead of countrymen Toni Rajala and Sami Vatenen. The scouting reports then were largely glowing:

International Scouting Services: "A big hard-nosed two-way centerman who can play with finesse and power, Nattinen has been climbing the rankings and landing himself on many NHL clubs radars with his great two way ability. He can play a variety of roles, and has a strong understanding of system play. He drives the net hard and is extremely difficult to move once he gets there. He centered Finland's explosive 'cage' line during the WJC in Ottawa and proved to be the most consistently effective center on the team for the tournament. Apart from his great physical qualities, he has a strong skill set that includes a hard shot, smooth stick and very strong passing instincts."

Redline Report: Strong, physical hard-driving power center. Two way character guy who manages to chip in on offense through sheer hard work and determination. Out-hustles defenders to loose pucks, winning all the races and competing his bag off every shift. Does not pick his spots - goes after the toughest North Americans and yaps at other team's tough guys. Plays with intensity and manhandles guys who try to rough up his goalie. Throws some crushing, bone-rattling checks in both open ice and along the walls. Causes lots of havoc for defenders around crease with heavy crashing. Has a long reach and powerful stride. Strong on the puck. Disciplined defensively; comes back deep to help d-men consistently and back-checks hard to break up odd-man rushes against and covers for d-men. A winner any coach would love to have.
Projection: 3rd line power checking center for top club.
Style compares to: Jordan Staal/Bobby Holik

While Trevor Timmons said "He played on the top power play at the world juniors. He's a big centre and that's what we're looking for. He'll be a big man when he finishes growing."

Taken 65th overall in the 2009 entry draft, he was hoped by some to be a future big centerman for the Canadiens. Of course his exposure has been limited as he has only got limited minutes in a European professional league. To those that don’t follow European hockey closely the only time to see him in action has been for the Finnish junior national team especially at TSN’s favorite Christmas time tournament.

He makes his North American debut this fall as the Canadiens' thought enough of him to sign him to an entry level deal and bring him to presumably play in Hamilton. Pierre Gauthier was quoted to have said "Joonas is a promising young player with size and skills. Despite his young age, he proved to be a very good player in a competitive professional league in Finland for the past two seasons, and also was a key member of the Finnish national team at the World Juniors last year." (thehockeynews.com)

Nattinen is a faller in our rankings, going down 5 spots after being ranked 17th in last seasons top 25, with new additions and 4 players previously ranked lower surpassing him. Interestingly, all those polled had him in the top 25 but not higher than 21, reflecting the common supposition that he has real potential to be an NHL forward but very limited upside. They are also a reflection of a commonly held sentiment that Nattinen was expected having more of a rising stock and his lack of notable strides has diminished enthusiasm for him. Corey Pronman of Puck Prospectus rates him higher, ranking him 9th among Montreal prospects and considers him a likely bottom six player with third line upside.

A defensive center with good size, Nattinen has played limited minutes against men in the top Finnish league the past two seasons and been apparently unable to secure a significant playing role which is not an encouraging sign. What is worse is how apparently other 19 year-olds on his team were playing bigger roles, including the likes of Jere Sallinen and Valtteri Virkkunen.

He has also been a staple of the Finnish junior national teams, typically playing an important role as a matchup center in international competitions. In the three tournaments he has attended he has acquitted himself fairly well but never been particularly notable, scoring at around half a point a game in each tournament. At the last WJC he centered what I thought was Finland's matchup line with the more offensively skilled Oiler's prospect, Toni Rajala, on his wing to intermittent success.

What kind of player Nattinen truly is will become much clearer over the next winter as he debuts for the Hamilton Bulldogs, assuming that he does not fall to the ECHL. 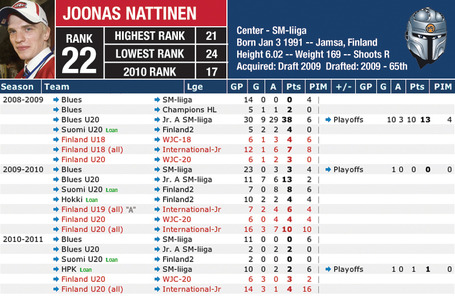 Known for defensive positioning and while not particularly physical is strong and good along the boards. He has an impressive frame that could easily add mass and strength to with age. According to Pronman's scouting report he is a decent playmaker, albeit one that hasn’t demonstrated much offense at higher levels of competition. He is very strong on faceoffs which is a definite advantage for a potential defensive centerman.

Not a good skater, lacking mobility and speed. The lack of a good skating tool can be lethal for the NHL aspirations of a defensive forward (see Chipchura, Kyle), so a failure to improve there would be the most likely reason if he fails to make the big leagues. He has not demonstrated much of an offensive game, with fairly limited offensive production past the Finnish junior leagues. In terms of counting stats he was behind even other 19 year olds on both the Blues and HPK in the Finnish SM-Liiga, which is very discouraging for a player that is supposedly one of his country’s top young forwards. His highest point total in the SM-Liiga is 3, and has had a whopping 6 points in 60 games in that league. In addition to a lack of speed, it may be that Nattinen simply cannot produce the necessary offense to be even a fringe NHL forward.

At this point I am very pessimistic about Nattinen’s future. He seems to not have been able to be a significant contributor in the SM-Liiga which does not speak favorably of his ability to perform even in the AHL. His future potential is to be an Andreas Engqvist type player, which makes it discouraging to think that he has yet to seriously demonstrate more ability to play at a high level than someone like Oliver Fortier. However, his injury problems have perhaps dampened his development thus far and a healthier Nattinen will show more promise.

He is still young and has plenty of time left to make the major strides necessary to have an NHL future, but there is also no doubt that the strides must be made and soon. For the next season his expectation would be to become a quality bottom six player for the Hamilton Bulldogs with the hope that he will develop into the same at the NHL level.