For the past three years, when the Canadiens have run into injury trouble on the blueline, Yannick Weber has taken the call.  Whether he was ready or not, the Canadiens have had to use Weber on several occasions over the course of his entry level contract.  His presence on the team has generally not been a good sign:  it has always meant that Andrei Markov was not available.  From that horrid 2009 Stanley Cup quarterfinal after Markov separated his shoulder, to that terrible streak after Markov cut his Achilles tendon to start the 2009-10 season, to last year's devastating ACL injury, it has been Weber who has had to be the guy to step into the lineup.  It's no fluke:  Weber possesses some of the puckhandling and PP prowess that the Habs lose when Markov isn't around.  He showed this in Kitchener, where he was one of the top defenders in the OHL, and he's shown it in parts of three years in Hamilton.  But after three straight seasons of being the unfortunate replacement, the Canadiens are finally looking like a team that can accommodate both Markov and Weber for a change.

2009-10 was a trying year for Weber.  He lost the role of the PP quarterback in Hamilton to P.K. Subban, had to make the sudden appearance in the Canadiens lineup when Markov and Ryan O`Byrne were injured in the first two games, and he couldn't quite get his game back on track as a result.  While many of his teammates were having breakout years under Guy Boucher, Weber focused on his defensive play, since he wasn't getting much opportunity offensively.  The results were mixed:  he was out of his depth at the 2010 Olympics representing Switzerland, but he helped chip in as a top 4 defenseman as Hamilton led the Western Conference and made it to Game 7 of the conference finals before their season ended.  It wasn't a typical year for Yannick, but it helped set up a solid 2010-11 season that would see him make the NHL for good.

Weber was cut from training camp to the surprise of no one, but he absolutely dominated the AHL offensively right from the season's start.  With 8 goals on 51 shots in just 15 games, Weber quickly made it clear to Canadiens management that he was ready for the big show.  O`Byrne was traded, Markov was hurt, and Yannick was back.  The end result is that our panel has given Weber a big bump:  he's up four spots and solidly in the team's top 10 this year at #8.  Only one of our panelists put him outside the top 10 (at #11), and two of them put him inside the top 5.  Weber also bears the distinction of being the only player in our Top 10 who was not drafted in the first two rounds of the NHL Entry Draft. 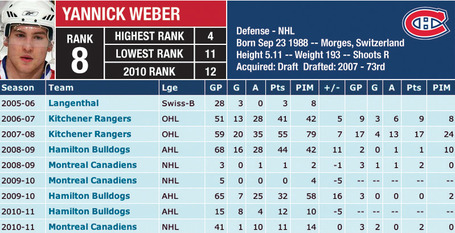 Weber has a great point shot, and although he's only scored four goals in the NHL (1 regular season, 3 playoffs), they've all been on Tim Thomas of the Boston Bruins.  While we would like to see him hit the net against other goalies, scoring that much on Thomas and Boston in general will always be a plus around these parts.  Weber is also a smart player in transition:  he moves the puck well, makes clean breakout passes and despite his reputation as an offensive defensemen, makes calculated decisions that aren't terribly risky.  While Subban will make the high risk play (and most often execute it), Weber will generally play a conservative game and use his teammates to get him out of tough situations. He also has shown some versatility, playing forward and not looking out of place despite the fact that he hasn't played forward at any level that we know of.  Oh, and he's trilingual.

Weaknesses:  Weber checks in at only 5'11", and while he's pretty solid, he isn't known for winning a lot of puck battles.  He played fairly protected minutes last year, and while his defensive game has improved, he likely won't ever be a guy counted on in tough, defensive situations in the NHL.  He's a pretty passive player in his own zone, and sometimes is overwhelmed by the action as a result.  More game action at the NHL level is needed to develop more clear instincts in defending at this level.

2011-12 sees Weber coming to training camp with a one-way contract, all but guaranteeing himself a spot in the 23 man roster that he was a part of for most of last season.  What isn't clear is what his role will be out of the gate:  there are five returning defensemen who are ahead of Weber, including Markov, Subban, Hal Gill, Josh Gorges and Jaroslav Spacek.  Spacek was Weber's most frequent defense partner last season, and it worked out quite well for Yannick.  His Relative Corsi was a +10, meaning that when he was on the ice, the team was a lot more likely to be attacking than defending (Subban's was a +10.3, and Paul Mara was a -15.6 for example).

Weber did have the most sheltered minutes of any Canadiens defender (faced the lowest quality of competition and started his shifts in the offensive zone more than anyone else), but that's not uncommon for a rookie.  He'll need to become more trustworthy in his own zone to push for a regular spot in the top 6, as Alexei Yemelin comes with a greater reputation as a 5 on 5 defender than he does.  However, if Weber can't crack the top 6 when the Canadiens have a healthy lineup, he could find his way into the lineup as a right winger, like he did in the postseason.

In a lot of ways, Jaroslav Spacek is an excellent mentor for Weber.  Both are under 6' tall, possess big point shots and have been asked to play multiple roles in order to help their team succeed.  Spacek has gone on to play over 800 NHL games so far, many of those as a top four defender, and its the kind of career that would be considered a big win for a player like Weber.  The Canadiens have three defenders facing unrestricted free agency in a year's time, so the opportunity for advancement in Montreal is very real for Weber.  Even if he doesn't crack the top 6 out of training camp, Weber could still play a big role on this team not just next year, but for years to come.