Share All sharing options for: Habs Top 25 Under 25: #9 Aaron Palushaj

Aaron Palushaj is a meteoric riser in our rankings this year, and I doubt any would say he didn't earn it. When Palushaj was acquired by the Canadiens he was playing for the same sad sack Peoria Rivermen team that Lars Eller was playing for. As with Eller, his offensive numbers looked fairly unimpressive, however they improved once he joined the Hamilton Bulldogs.

However I don't think that anyone would have predicted the two fold improvement in counting numbers in a single calendar year. Palushaj's improvement extended to all areas of his game, and it's unlikely that much of his scoring rate is due to luck as he significantly raised his shot output per game from 1.70 to 2.35.

Palushaj managed to lead the Bulldogs in goals, assists (tied with David Desharnais), points and plus/minus differential (tied with Brendan Nash). Impressively Palushaj managed to improve his numbers in the post season, stepping it up to the tune of a point per game and an impressive 3.11 shots per game. His line with Nigel Dawes and Dustin Boyd shredded the competition once put together, especially on the powerplay where Palushaj recorded 5 goals and 5 assists in just 19 games.

Chris Boucher scouted Palushaj along with 5 other Bulldogs in a game against the Toronto Marlies last season, where Palushaj recorded the second best grade to former Bulldog Mathieu Carle. Palushaj struggled in the first two periods of the game before stepping it up in the third when the game was on the line.

This is a big year for Palushaj as going into the season he's situated as the #1 call up for the Canadiens should an injury occur to a top 6 forward, and he has to maintain his growth without the linemates he thrived with last season. 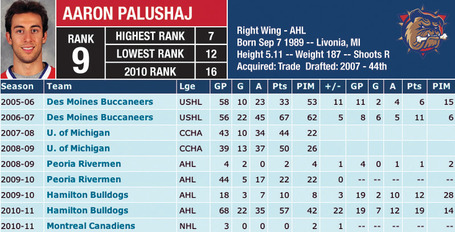 STRENGTHS: Of the players on our list this year who haven't yet permanently made the NHL, Palushaj is likely the most NHL ready. He looked very solid last year during training camp and preseason when he played with Tomas Plekanec and Mike Cammalleri in a couple games. He also didn't look out of place as an energy player in his brief three game call up in mid-March. He managed to get off a shot per game over those games and registered a +1 rating while averaging 8:31 of ice time per game.

When first acquired by the Canadiens for Matt D'agostini, scouting reports were fairly negative about Palushaj's skating ability, Corey Pronman of Hockey Prospectus even remarked that he had "lead feet". In the last year and a half Palushaj has turned that criticism on its head, as speed is now one of his best tools. His hustle is well regarded but his overall skating has improved vastly since those original scouting reports. Looking quick at the NHL level is difficult, which tells you how hard of a worker Aaron Palushaj is.

His passing skills are very good, especially once he gets used to his linemates. He has decent escapability in the offensive zone which allows him to be a little daring in his playmaking. Palushaj has played clearly excelled in the same defensive system as Jacques Martin deploys with the Canadiens. He backchecks hard and plays a complete game.

WEAKNESSES: While Palushaj has no fear of going to the tough areas on the ice, he's not a physical player. He has an average sized frame and can get knocked off the puck easier than many of his larger peers. He has very good offensive skills overall but is a playmaker for the most part. He's been able to score consistently in the AHL over the past year but it's unknown if that scoring could translate to the big league. Palushaj's size may limit his potential in the NHL if he can't improve his skills in beating players one-on-one, as Pronman notes that his skills in this area are not impressive.

FUTURE: The biggest knock on Palushaj coming into this season is that his best games were when he was surrounded by arguably NHL level talent. His year was uneven in that he dominated the first and last two months of the year while merely putting up okay numbers from December to the end of February. Coinciding with these hot streaks was Palushaj being put on power lines, first with Desharnais and Max Pacioretty to start the year, and with Dawes and Boyd to end it. However in watching Bulldogs games in the playoffs and towards the end of the year, it was the opinion of many contributors on the panel, including myself, that Boyd was the one being carried by Dawes and Palushaj's chemistry.

This year Palushaj must take a larger role with the Bulldogs as Dawes and Boyd have both moved on to the KHL. Aaron will be the top offensive forward in Hamilton unless he beats the odds and makes the Canadiens out of training camp. With Mathieu Carle traded and several veterans moving on, it may be that Palushaj is thrust into more of a leadership role this year as well.

Being a hard worker it wouldn't be surprising to see a point per game season from Palushaj in the AHL. He will also be looking to stay healthy as he missed significant time the last two seasons.

Palushaj has the talent to be a low end top 6 forward, but it's unlikely he'll need to be in over his head with the Canadiens. It's far more likely he ends up being an average to high end third liner who can put up points against lesser competition or stay even against some tougher competition as a checker who pops in a few goals now and then. His work ethic and lack of fear in going into the dirty areas should propel him into the NHL sooner than later.