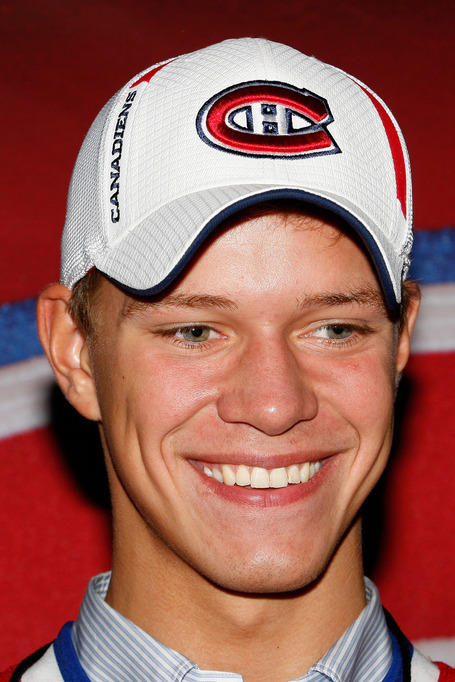 Trevor Timmins might have been getting a bit ahead of himself when describing Alexander Avtsin after the Canadiens drafted him 109th overall in 2009.  Amid saying things along the lines of how Avtsin's play is like Ovechkin's, he also proclaimed Avtsin to be immediately ready to play in the American Hockey League for Hamilton.  After one more year in Russia where he got his first KHL action in, Avtsin did come over to play in Hamilton as a teenager, but he rarely escaped the fourth line, and was a frequent healthy scratch.

However, even after such a frustrating season, the upside on Avtsin is still why he's highly regarded amongst our panelists.  Expectations have tempered, but Avtsin still ranks a solid 11th in our voting this year, a fall of three spots.  While Avtsin didn't exactly endear himself with his first season in North America, it is important to not grade him too harshly on his AHL rookie year.  Avtsin was just one of a handful of teenagers playing in the AHL last year, and when you combine that with the issues of adapting to a new culture, language, and ice surface, there were a lot of factors working against him.  So I've looked at all teenagers who have played in the AHL since 2004 to kind of get a feel for how common Avtsin's performance is.

So Avtsin's season is poor even in comparison to his peer group (teenage forwards in the AHL since the '04 lockout), but that doesn't mean he'll be unsuccessful:  he's at the same pace as Kostitsyn who is a top 6 NHL forward, a similar pace to Bruins playoff hero Nathan Horton, and the same pace as Jerry D`Amigo, who went back to the OHL late in the season last year and put up 37 points in 28 games.  Many of the players (though not all) had been in North America previously as well (Grachev was a OHL star as an 18 year old), so Avtsin's peers in this regard include only Voloshenko (who dropped to 30 points in 76 games as a 20 year old), Filatov, Bergfors, Tukonen, Anisimov, Tatar, Mayorov, and Kostitsyn.

To be blunt, it's too early to tell what kind of player Avtsin can be, but most players in his situation will get a shot at the NHL.  He has a lot of growth to do, and despite his tough first year, there are a number of examples of players who had those tough starts that have gone on to success.  And as Voloshenko and Kalus can attest to, a quick start in the AHL is no means a guarantee of success, either.

Strengths: Avtsin possesses that tantalizing combination of skill, size and speed that scouts will trip over each other to try and find.  It's the package that made Timmons so optimistic back in 2009, making a special trip to Moscow in his draft year to watch him play for Dynamo's farm team (where Avtsin set a team record for goals and points).  Avtsin's deking, passing and shooting skills are all in the above average range, so while he's noted for his goal scoring ability, Avtsin has many ways in which to give defenders fits.  He's also been honing his game against men for the past two years in top professional leagues, something not too many 20 year olds can claim.

Weaknesses:  Avtsin's struggles this year showed he had a lot to learn about the team game.  His defensive accumen is very low, and his skill set which allowed him to dominate the lower Russian leagues is not as scary to seasoned professionals.  To put it bluntly, Avtsin needs to learn how to be a professional player, and not just possess professional skills.  He'll likely never be much of a penalty killer, or a guy on the ice to protect a lead in the final minute, but he will still need to learn a lot more about the game away from the puck in order to even gain top minutes in the AHL, let alone a top 6 NHL role. He also needs to fill out his frame, but at 20 his size is pretty typical.

Looking at the lineup for Hamilton this next season, Avtsin won't be handed a top 6 role out of training camp.  A year ago, Jacques Martin perhaps foreshadowed how tough of a year Avtsin was in for when he didn't dress him for any pre-season games.  The onus is on him to push for prime ice time, and with a year of tough lessons behind him and an offseason to improve his fitness level, one hopes he'll have learned enough to push for such a spot, and hopefully we'll see him in preseason action, too.  If he does make the push, I can't help but think we'll be putting Avtsin back in the Top 10 of this list next summer.  If he doesn't, I expect we'll be less forgiving of his circumstance and he'll drop a lot more.