With 43 games as a member of the Montreal Canadiens under his belt, Ryan White has the most Habs experience thus far in our Top 25 Under 25 countdown.

The Manitoba native has been a late cut in the last two training camps. This season, after signing a one-year one-way deal,  we'll finally see him on the roster to start the regular season.

White's energy on the third/fourth line for a full season should benefit the Canadiens fully, as well as give the opponents fits.

"The Habs certainly could use a player like that," said HabsWorld's Brian LaRose. "He has shown in flashes that's he's capable of playing that role, and playing it well." 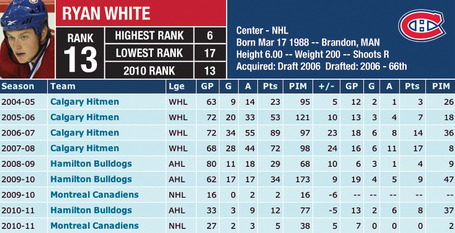 Strengths: Not afraid to drive the net, when the opportunity arises and will go into the corners to fight for the puck. With Jacques Martins notorious line juggling, White found himself playing with a host of linemates last season. His versatility gives the Habs bench boss some options as the game/season rolls on.

At 6'0 200lbs, White is not afraid to back down to anyone, and will stand up for his teammates as Johnny Boychuk learned this past season. He also recorded 70 hits, half the number team leader Andrei Kostitsyn recorded in three times the number of games.

As his junior career progressed he undertook a stronger conditioning regimen. That combined with an already built-in strong work ethic gives the Canadiens a hard working forward in the bottom six.

"Ryan White is the type of player that the Habs organization has been looking to acquire for years. Consistently there has been a shortage of skilled fourth line players with size and grit," was how AllHabs Iain Carnegie wrote of him this past July."The closest we’ve seen to filling that role are Maxime Lapierre and Travis Moen. One of that duo is no longer in Montreal."

White's defensive abilities are most crucial this season. Last season he found himself leading the Habs in neutral zone situations and led in positive events per minute. The downside to this review is that he also had the most negative events per minute, which tarnished his net rating.

Granted that was over just 27 games in 2010-11, so the latter of those scores should diminish over a full season. That indicator may have shown based on the same assessment formula during the playoffs, where he had the 10th best risk/reward margin.

Weaknesses: Most of our panelists agreed that offensively we aren't going to expect anything out of White, and in terms of our rankings has likely hit his peak. But any contributions from him on the energy line, or filling in on a top-six line, is just an added bonus.

His skating is also not the strongest, but his hustle can counter that in races for the puck.

With this being his first full NHL season, he will still be in the learning curve and under the watchful eye of Martin as the season progresses. We all know how that can go for younger players, so White will want to avoid foolish mistakes and penalties.

Analysis: White has all the makings of an effective bottom six forward. Playing on a contract year and full time in the NHL gives him an excellent opportunity to show what he is worth. He saw a very brief amount of ice time playing short-handed last year, but will likely get more penalty killing opportunities this season. The important thing about Ryan White is that he knows what is expected of him by the Canadiens, and will step up when needed.