It's safe to say that Brock Trotter isn't your typical prospect.  A collegiate free agent, he joined the Canadiens midway through the 2007-08 season, and the reason for his dropout status wasn't ever fully disclosed.  Following a two game suspension by the University of Denver, Trotter left the program for good and the Canadiens were the winning suitors for his NHL services.  It was later revealed that the Canadiens had approached him in the summer of 2007 about turning professional, but Trotter decided to attend another year of college instead.  Trotter languished a bit in his early stint as a professional:  his dropout meant the Canadiens had to burn a year of his entry level contract on a partial season, and his first full AHL season saw him improve to a respectable 18 goals and 50 points total.  Then, like a few other prospects on our list to date, Guy Boucher happened, and his pro prospects took off.

Trotter has always been a goal scorer.  As a 16 year old with the Dauphin Kings of the Manitoba Junior Hockey League, Trotter scored 32 times.  While his playmaking skills are also very good, it's his goal scoring that is his true strength.  He played centre in the USHL and the NCAA, but in Hamilton, he was pushed aside for David Desharnais.  With Desharnais feeding him in 2009-10, Trotter scored 44 goals in 94 regular season and playoff games.  His 38 regular season goals were the second highest in Hamilton Bulldogs history.

However, instead of building off of his two game NHL call-up and challenging for a roster spot in 2010-11, Trotter decided to use one of the limited options available to him as a Restricted Free Agent:  he signed with Dinamo Riga of the KHL.  That move had our panelists last year quickly dismissing Trotter:  he was left off enough lists to finish outside our Top 25.  Well, after a year in Latvia, Trotter is back in the fold, and he's again in the mix for a roster spot out of training camp.  He clocks in at #16, having made everyone's Top 25 list this year. 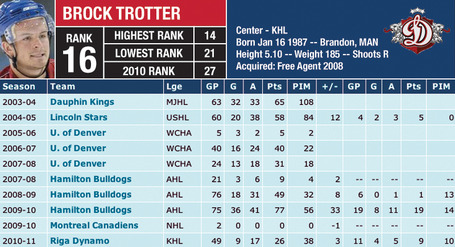 Strengths:  Like I said, Trotter is a goal scorer.  He's a right handed centre/right winger that has a variety of tools in which he can beat goaltenders.  He possesses a strong and accurate wrist shot, is an above average puckhandler, and he doesn't need a lot of open space to make defenders pay.  While his path has been unorthodox, he has proven to be quite resilient and adaptable in his young career.  Even though his KHL year didn't dazzle, he finished quite strong with Riga, gaining a promotion to a top 2 centre role on the team about a month before the playoffs, and putting up 9 points in 11 games in the post-season.  He's moved up from Junior A hockey (of varying levels) to a top NCAA program to the AHL and now the KHL, and if he's ever going to make a push for a NHL spot, this is his time.  Plus, he can do this:

Weaknesses:  There are probably a few more of these to list right now than positives, but it's important not to get too caught up in this.  He is not a strong defensive player at all, and as a result, the centre position is not really for him if he's to make it in the NHL.  This is only reinforced by his lousy faceoff numbers in the KHL (44.6% in the regular season, 38.6% in the playoffs), so he won't be filling in the role of a right handed centre that Jeff Halpern played last year.  He also lacks both size (listed at 5'10") and top end speed, not unlike his old linemate Desharnais.  Trotter will be turning 24 years old in early September, and he's still just battling for a spot in the NHL.

All that being said, Trotter is one of only a handful of players on this list that could make an impact at the NHL level this coming season.  The KHL is a tough league, the second strongest in the world, although we aren't exactly sure how well it compares to the NHL.  Some might see his year abroad as detrimental to his NHL career, but me being who I am, I actually think it helps a player to take on new challenges to help figure out what kind of player one can become. The passionate hockey fans of Riga, which Trotter called 'the best in the league', could help him deal with playing in Montreal a bit better than Hamilton did, as well.

What also helps is his waiver eligibility:  he must pass through waivers in order to go to the AHL.  So if he comes to training camp as one of the better bubble players, he'll likely be given the first kick of the can, so to speak.  The team also lacks right handed shots that can put the puck in the net:  only Brian Gionta of the regular forwards fits that description, so there may even be an opportunity to get some PP time in Montreal in a role similar to what Glen Metropolit and Halpern played last year.  And, as alluded to earlier, he has established chemistry with David Desharnais, and could help the Canadiens out by being a handful against opposing third and fourth lines.  Certainly, in his first NHL game he and Desharnais (along with Ryan White) showed a lot:  Trotter led the team with five shots on goal and drew three penalties against Pittsburgh late in the 2009-10 season.

Don't be quick to dismiss Brock Trotter at this year's training camp.  And even if he doesn't immediately pay off, remember that he has a pattern of improving over time in the professional ranks.  While expectations for him should stay modest, he's probably done enough in his career to warrant a decent look at the NHL level.  If it doesn't work out, at least he knows he has what it takes to succeed elsewhere and make a good living doing it.