Share All sharing options for: Habs Top 25 Under 25: #19 Magnus Nygren

Montreal’s most unusual draft choice of the 2011 draft, Nygren is an overager that would have been eligible for NHL free agency a couple of weeks after the draft.  After being passed over at the draft twice, Nygren became a sufficiently valuable asset to spend a 4th round pick to secure his rights. He was the highest drafted overager of the 2011 year and it was rumoured that a number of teams were interested in taking the Swedish blueliner. While this sort of pick is unusual, it should be noted how the Habs have had success with this tactic before, notably with the excellent 2004 ninth round pick of Swiss professional Mark Streit.

What made Magnus suddenly so desirable? A glance at his stat-line makes it obvious. Over the past season he has gone from a relatively uninteresting defender playing in the lesser Swedish leagues to one of the top defenseman point producers in the Swedish Eliteserin. Including playoffs and regular season he produced 7 goals and 25 points during 36 games for the Farjastad club, a rate of 0.69 points per game. At 20 years old he was one of the top point producers at his position in probably the 3rd best league in the entire world.

Using Desjardian's NHL Equivalencies, his points totals convert to a 44.46 point full season in the NHL which are top level numbers for a defenseman. A forward with a NHLE of above 40 is considered very promising, a defenseman with that level of production is very rare. Subban by comparison had an NHLE of 27.06 in his 20-year-old season while Yannick Weber averaged around NHLE of 20 in his first two Hamilton years. By comparison, highly touted Flames/Rangers prospect Tim Erixon who is of the same age as Nygren only scored 32 points in 66 games. He'd be the most impressive Swedish point producer of his year if it wasn't for Ottawa prospect David Rundblad's historic season.

The caution that goes with the stat line is how his performance after being recalled to his Farjestad club in the 2nd half of last year is not reflected by how well he has done elsewhere. His production actually jumped after leaving the weaker Allsvenskan for the Elitserien. The question then becomes, are these numbers the result of Nygren's real talent or just a hot streak under favourable circumstances.

The picture becomes clearer after consulting some followers of the SEL. Apparently Nygren's club suffered in the early part of the year from a lack of good options to run the point on the powerplay which helped precipitate Nygren's recall to the main club. Up to that point, Farjestad had preferred to be patient with Nygren, keeping him playing in lesser leagues to allow his talent to mature before thrusting more responsibilities on him. He proved very successful there and thus was a key part of their man-advantage which helped propel Farjestad to the SEL championship. Thus the picture of a young player with the right skills taking advantage of an opportunity to play a supporting role on a strong team. Perhaps not the driver of results by a crucial cog in the machine. Now one must hope that his breakout season can be replicated and expanded upon going forward.

Beyond the stats Nygren is a right-handed puckmoving defenseman. Two qualities that are often in demand for defenseman which Montreal has tended to corner the market on of late. If not needed by Montreal, he could also be a useful trade chip for future moves.

Nygren was a somewhat controversial choice for our panel. Two of us had him in the top 15 while two others did not have him even in the top 25. I imagine this is in large part due to the paucity of information readily available about Nygren at this point, with North American and English language prospect trackers tending to focus on those that have either been drafted or expect to be drafted by an NHL team.

As a recent draft pick Montreal holds Nygren's rights for another two years. He is known to be under contract in the Elitserien for that time. Arranging for a player to come over from Sweden is not the big issue that breaking a KHL contract is so if both Nygren and Montreal is willing he could likely be brought over to play in Hamilton as early as next year, or possibly the year after. He could also sign with Montreal and be loaned back to his home club to develop their until he capable of attempting to win an NHL job. This may also be a good option as the Elitserien is a very good league from which players are often able to move straight to the NHL.

As mentioned before, their are few reports on a player that has largely been off the radar screen until recently. I do know that the Red Line Report has been high on him since he's been draft eligible and held him to be the best overager of the 2011 draft. From less official sources I've been able to gain a basic insight into how Nygren plays although with the caveat that I have not seen a single game that he's played.

A skilled and mobile defenseman that shoots right. Is a power play specialist with a very good release, good passing game and above average hockey sense. Handles the puck with confidence and usually puts up good numbers. Is fairly good defensively, although there is some room for improvement. 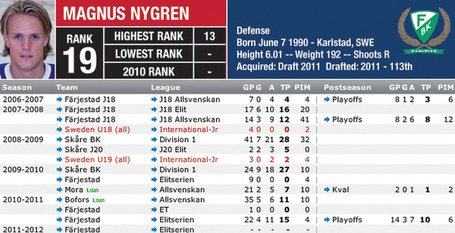 The first thing everyone brings up about Nygren is his shot which is not so much overpowering in speed but very accurate and his main offensive weapon. However, Nygren apparently isn't just a Marc-Andre Bergeron style shooter as he is also a strong passer and playmaker from the back end. Has average size for a defenseman (6'01" and 192 lbs) but is supposed to be a fairly good physical player, willing to mix it up for his teammates benefit. James Wisniewski seems to be a good comparable in terms of style.

Defensive play is not a strength, although how bad he is at it depends on who is talking, from below average to worryingly bad. A major concern is that he may have been leaching off how good a team he was playing for last year and that his warts would be exposed in a different situation.

Nygren is set to play for Farjestad once again next year. He would be expected to be their leading offensive defenseman and powerplay quarterback while playing for a full season with the team. Essentially he must first prove he is not a one year wonder. Hopefully his reportedly good hockey sense and physical play will also translate into improving defensive abilities which is key for a future as more than a powerplay specialist. For his career, he seems to have a decent shot at becoming a third pairing puckmoving/powerplay specialist with the outside chance that his defensive play improves enough to become a top-4 defenseman like James Wisniewski.