Andrei Kostitsyn has signed a one year deal with the Montreal Canadiens for $3.25 million. In his last year of RFA status Kostitsyn was eligible for arbitration, where in all likelihood he would have received a raise over the $3.25M he's made the last 3 seasons, but instead he's taken a solid deal that will bring him to unrestricted free agency next season.

Kostitsyn is coming off the second best statistical year of his career while rounding out his defensive game to previously unknown levels. Kostitsyn also managed to cut down his PIM significantly from the last couple of years, despite the Canadiens being one of the most penalized teams in the NHL this season. 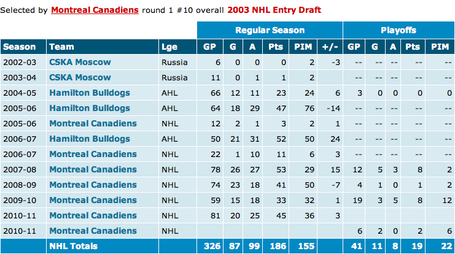 The "Belorussian Bear" has a tantalizing skill set that has awed and annoyed fans in equal measure as Kostitsyn has been a streaky player in the NHL thus far. Many believe his talent level and size should put him in the elite range of goal scorers instead of humming along as a solid but unspectacular top 6 forward. The more keen observers however has seen the steady progression in Andrei's game, as he becomes a solid producer and a player who can handle top competition and not wilt.

Kostitsyn is also coming off a very impressive performance for Belarus in the IIHF World Hockey Championship, where he lead his country in scoring with 3 goals and 4 assists in 5 games, despite coming to the tournament late. He also had 2 game winning goals in the tournament.

I for one am very happy to see that Pierre Gauthier isn't ignorant of Kostitsyn's value to the Canadiens. One thing I would like to see the Canadiens try with Kostitsyn next year is to allow him more offensive opportunity on the powerplay by playing him as the Russians did; on the point. Kostitsyn ran the point in the WHC like a pro, and ate other teams alive more often than not. He has the passing skill and hard shot to be effective there in the NHL. With Roman Hamrlik and James Wisniewski likely gone to free agency, a spot on the second unit is open, and I believe Kostitsyn would prove more useful there than Jaroslav Spacek. Perhaps Emelin will take that spot eventually, but considering Jacques Martin usually has players earn his trust before rewarding them, he may not start there.

Here is the Canadiens official press release on Kostitsyn:

Canadiens General Manager Pierre Gauthier announced Thursday the signing of forward Andrei Kostitsyn for the 2011-12 season. As per club policy, financial terms of the agreement were not disclosed.

" Andrei Kostitsyn is an important part of our group of forwards, and we are happy to have agreed to a contract extension with him. As a player drafted and developed by the Canadiens organization, Andrei ranks year after year amongst our point leaders," said Canadiens general manager Pierre Gauthier.

In 2010-11, Kostitsyn, 26, ranked fourth on the team in scoring and third in goals, with 45 points (20 goals, 25 assists) in 81 regular season games. He served 36 penalty minutes while averaging 15:53 minutes of ice time per game. Kostitsyn ranked tied for first on the team with six game winning goals, first with 140 hits, third with five powerplay goals and fourth with 196 shots on goal. He added two goals in six playoff contests.

Born in Novopolotsk, Belarus, Kostitsyn will enter his seventh season in the Canadiens’ organization in the fall. The 6’0" and 213 lbs forward has recorded 186 points (87 goals and 99 assists), 155 penalty minutes and a +16 plus/minus ratio in 326 NHL career games, all with the Canadiens. He has registered 19 points (11 goals, 8 assists) in 41 playoff contests.

Kostitsyn was the Canadiens’ first round selection, 10th overall in the 2003 NHL Entry Draft. He signed a three-year contract with the Canadiens on July 2, 2008.