Montreal uses its first round draft selection to claim a defencemen.

The Montreal Canadiens have selected Nathan Beaulieu of the Saint John Sea Dogs. Coming into the draft Beaulieu was rated between 9th and 12th among most scouting services. That he dropped to 17th was an unexpected gift for the Canadiens. Like many Canadiens fans I was hoping the Habs would take a forward with scoring potential with their pick in this draft, but when a player the calibre of Beaulieu falls into your lap, you don't pass it by, especially when he plays in the QMJHL.

Beaulieu is a large, strong defender listed at 6'3" and 191lbs. He's a left-shooting defenseman who is being compared in style to Los Angeles Kings' defender Jack Johnson, who had a breakout year in 2010-11.

Most scouting reports agree that Beaulieu's strongest assets are his skating ability and offensive instincts, although he is guilty of forcing plays at times when there isn't one to be had. In fact in many respects Beaulieu seems very similar to another Habs prospect we have all come to love over the last few years: P.K. Subban. If anything, however, Beaulieu is less raw than Subban was at the same age. While he may not be quite as dynamic offensively, he may be ready to join the big club sooner than Subban was. In fact he has an extra year of experience in major junior hockey over where P.K. was when he was drafted, so he might be in the AHL as soon as the 2012-13 season.

Adding Beaulieu also gives the Canadiens yet another invitee to the Canadian World Junior summer camp, for a total of three players with Michaël Bournival and Brendan Gallagher both being late cuts from the team last year.

Beaulieu's stats are very impressive so far in his junior career (taken from hockeydb):

While Saint John undeniably has an elite team with lots of talent, Beaulieu has stood out above his peers and even vaulted over Simon Despres this year on the team's depth chart.

Beaulieu likely only became more attractive to the Canadiens when the Sea Dogs won the Memorial Cup this season. It's well known that the Habs value leadership and intangibles very highly. The fact that Beaulieu actually performed at a higher rate in the playoffs in two runs to the Memorial Cup tournament speaks volumes as well.

With Subban, Andrei Markov, Josh Gorges, Jarred Tinordi and now Beaulieu in the organization for the foreseeable future, and perhaps Alexei Emelin and Weber as well, the Habs defensive core is shaping up to be one of the NHL's strongest in the near future. However personally I believe that the acquisition of Beaulieu puts Weber in a dodgy situation. Long term I don't see a place for him with the Habs among this group, so he could very well be trade bait to fill another hole on the Canadiens this season. I'm a big believer in Yannick Weber so I'd like to see him stick around for awhile longer, but at this point you can't fault Gauthier if he's included in a package for a top 6 forward.

The Montreal Gazette's Canadiens blog; Hockey Inside Out posted the following scouting report from Future Considerations where they valued Beaulieu as the 9th ranked skater overall in this year's draft: 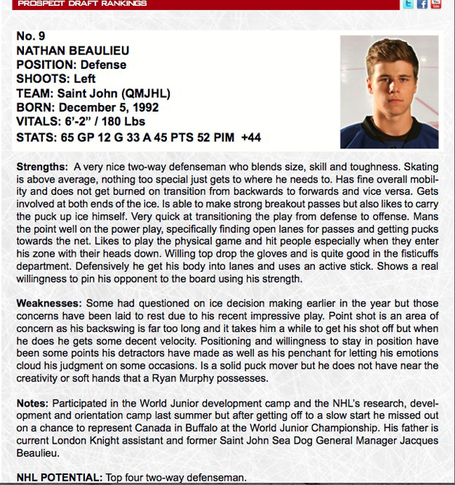 Audio from Beaulieu from HIO

Here at Eyes on the Prize we rarely indulge in rumour mongering, but it's that time of the year so we may as well cover the rumours that are flying all over the place in Minnesota going into the middle of the night. It seems that Kirk Muller may have been hired by the Vancouver Canucks organization to coach their new minor league affiliate, the Chicago Wolves. Vancouver's general manager Mike Gillis has stated that Muller would be the perfect fit, but as of the last time TSN checked in during the draft, Gillis had not yet contacted Muller about taking the job.

Reported widely among mainstream media sources on twitter; the Canadiens were negotiating with the Detroit Red Wings for a long time tonight. Speculation is that Detroit is interested in obtaining the negotiating rights for James Wisniewski, but Montreal wants Detroit's 2nd round pick tomorrow in return, which may be a little steep.

Last and most outrageous, Renaud Lavoie of RDS reported several times today that teams like Phoenix may be interested in acquiring Scott Gomez. While this may be what many fans of the Canadiens want, without a replacement readily available it would still be a very risky move for the Habs, that's if this absurd idea is actually true. Renaud posted this link on the Gomez rumours.