Cap set to jump, Gauthier opens his wallet and other links

Share All sharing options for: Cap set to jump, Gauthier opens his wallet and other links

So was the report that next season's NHL Salary Cap is going to $64 million the catalyst for today's signings by Pierre Gauthier? Of course not.

It's been widely known, for sometime on the internet before TSN's report, that the league cap would be in that range. Monday afternoon, the NHLPA's executive committee voted via conference call to have five per cent added to the calculation of  the cap. The league is expected to make the official cap announcement before the NHL Entry Draft this weekend.

In any event, the Montreal Canadiens GM is making quick moves to get his roster signed before the draft, and ultimately the July 1 free agent market. With the likes of Hal Gill, Andrei Kostitsyn and Alexei Emelin already signed to contracts, the Habs reached terms with both Max Pacioretty and David Desharnais on two-year deals.

While we know that Pacioretty will be a top-six forward, the Desharnais signing is raising a few eyebrows on the boards as to whether or not this is a move to possibly deal him.

More links after the jump.

In Bruce Dowbiggin's Sunday Globe and Mail column, he called it pretty buch how many of us see it.

"One final thought on rookie Marchand: How come when he abuses a superstar he’s applauded by Hockey Night in Canada and the media as a savvy kid who gets under the skin to win. But when Montreal Canadiens rookie P.K. Subban did the same, we were told by the same voices that he was a punk with no respect who needed to be taken down a notch? Is it because Marchand is a Bruin, a sacred squad on Hockey Night, because Sedin is a European or because Marchand is white while Subban is black, or all of the above. Take all the time you need to answer."

Arpon Basu tweeted earlier today that Pacioretty, over his final 20 games, led the Canadiens with 11 G (7 on PP) and 17 points and was tied for 4th in NHL over those six weeks. He also looks at what the Canadiens need in the draft.

Pat Hickey on the Habs Monday signings and who's next.

Niklas Lidstrom has signed on for one more season with the Detroit Red Wings With Brian Rafalksi retired, could James Wisniewski possibly be the best option to take his place in Motown?

From the archives and I know this will cue the trolls to call the Habs a bunch of dirty players. But trust me, the Canadiens weren't the only stick swingers back in that era.

Changes in Bruins land. Evan, who was the head honcho at Stanley Cup of Chowder has decided to go out on top. He's passed the reigns on to Ryan Durling who brings us snaps of Brad Marchand in action. Funny how when pics of Carey Price or Andrei Markov indulging show up, the media went nuts.

Durling also promises to bring "150% more Habs hate - and yes, we've got big plans for that." Just as I thought CoC would take a civilized turn.

The Toronto Maple Leafs Brian Burke is a little peeved at ESPN . He took it out by dumping assistant coaches Keith Acton and Tim Hunter.

I know a lot of folks are not happy with the new format from our good friends at HockeyInsideOut.com, but his screen-shot, caught by my friend Eric Rosenhek is just salt on the wound. Ouch! 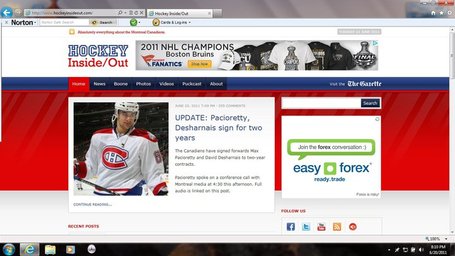