Share All sharing options for: May 18, 1971: Habs beat the odds to win the Stanley Cup

"If you add it all up, it was just like fiction. I don’t care what happens, I’ll never see the likes of that again." — Dick Irvin, Jr

Forty years ago today, in a hot Chicago Stadium, the Montreal Canadiens won their 17th Stanley Cup in a dramatic Game Seven against the Chicago Black Hawks.

The Habs overcame a two-goal deficit in the game to win 3-2, thanks to Jacques Lemaire’s famous slapshot goal, from outside the blue line on Tony Esposito, and veteran Henri Richard’s two goals, including the game-winner.

The come from behind win was somehow fitting, as it reflected the adversity the Habs had faced in this Final series and their whole post-season. The Habs also had to come back to win Game Six and stay alive. 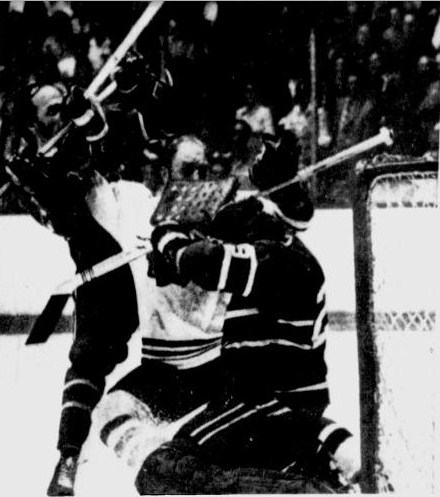 Of course, the Canadiens had an uphill battle right from the start of the playoff year in taking the opening round series against the heavily-favoured, record-breaking, 1969-70 Stanley Cup champion Boston Bruins, with their stars Bobby Orr and Phil Esposito. The Montreal-Boston series also included the famous Game Two comeback.

They also had a difficult semi-final series against the Minnesota North Stars that included some team turmoil involving veteran John Ferguson.

After all his years following hockey and the Canadiens, Dick Irvin Jr, has always said that the 1970-71 playoff year was his favourite. And he’s not alone. Many observers say that the 1970-71 Canadiens' Stanley Cup win was the team’s most memorable.

After the win, Henri Richard said, "The best. The best of all the ten Stanley Cups I’ve won. It’s the best, better than the other nine because we were so much the underdogs it wasn’t funny." He added that the two goals he scored in Game Seven were the most memorable of his career. Henri of course, would win one more Cup in 1972-73, as team captain, to bring his total to an unmatched eleven Stanley Cups.

Then there’s of course the Canadiens dramatic seven-game series win against the powerhouse Bruins. The win was largely attributed to law student goaltender Ken Dryden, whom coach Al MacNeil decided to start in net even though he had played only six games with the team, after being called up a month earlier from the Montreal Voyageurs.

Dryden’s performance against the Bruins and in that playoff is now legendary. He would win the Conn Smythe Trophy before winning the Calder Trophy as Rookie of the Year the next season.

The heroics of the Canadiens netminder carried into the Final, where Dryden made what was described by Ferguson and others as "the stop of stops."

With ten minutes to play in the third period, Ferguson details the play in his autobiography "Thunder and Lightning."

"[Jim] Pappin swept in and took a pass eight feet in front of the Montreal net. Pappin shot, then raised his stick in celebration, so certain the puck was in. So was I."

"I was moving across the net, following the course of the pass," Dryden explained. "I really wasn’t moving toward Pappin’s shot. Pappin’s shot hit me low on the right pad. I was fortunate."

Dryden wasn’t the only rookie or young player who made important contributions to the Stanley Cup win. Some of them included Guy Lapointe, Pete Mahovlich, Réjean Houle and Marc Tardif.

Then there’s the fact that the mid-season acquisition of future-Hall of Famer Frank Mahovlich would turn out to be vital for the Habs that playoff year. The Big M established a new playoff scoring record with 27 points.

Finally, there’s the story of the team’s two veterans. Henri Richard scored the last two goals, including the Cup winner, after being benched by coach MacNeil earlier in the series.

Angered, Richard said that MacNeil was the worst coach he had ever played for.

Some people in Québec tried to turn this into a French-English feud. Remember the previous October, Quebec had lived through the October Crisis. MacNeil had to be protected by body guards at both arenas after Richard’s declaration, and have them at his home as well.

As the Habs sipped champagne, Richard said, "I’m glad we won. It was a helluva relief after what I said earlier. I should have kept my mouth shut."

The pair hugged as the team celebrated their victory. "This was a player-coach thing, and nothing more," The Pocket Rocket said. "I meant what I said when I said it, and regretted it two minutes after because of the way it came out." After a brief vacation, MacNeil resigned as coach. 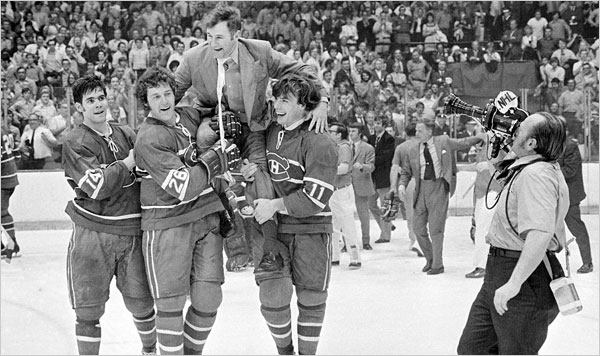 Then there’s the fact that the Stanley Cup win provided a storybook ending for the career of the great Canadiens captain Jean Beliveau. Le Gros Bill displayed tremendous leadership throughout the playoffs on and off the ice. Although almost 40 years old, he established a new NHL mark for assists in one playoff year.

"I knew it was the last time for me," Beliveau said. "I was ready to step aside in my 40th year and what a great way to go out, holding the Stanley Cup."

Beliveau began what would become a tradition in the NHL after Stanley Cup presentations.

After receiving the Cup from league president Clarence Campbell, he raised it over his head and took it for a stroll around the ice. Even the Chicago fans, disgruntled at their team losing, cheered on the Canadiens captain as he carried Lord Stanley’s mug around the rink. There is some dispute that members of the Detroit Red Wings may have done it prior, but Beliveau officially put the stamp on the tradition.

I was less than two months away from turning 6 years old when the Canadiens won the Stanley Cup that year so I don’t have a clear recollection. My first clear hockey memory was the 1972 Summit Series. But I’ve become fascinated with the 1970-71 Habs Stanley Cup win. Ever since the VCR era started in the 1980s, I’ve been trying to obtain footage of that series.

The following video is a highlights montage I’ve prepared from the three Canadiens playoff series clinching games: April 18th Sunday afternoon Game Seven in Boston (from CBS), April 29th, Game Six in Minnesota and May 18th in Chicago, plus post-game and Stanley Cup Parade footage held the very next day in the streets of Montreal. Scoring the series clinching game-winners are J-C Tremblay against Boston, Réjean Houle against Minnesota and Henri Richard, against Chicago. (Apologies for the varying sound levels).