I guess there's hope for Scott Gomez to earn love from the Montreal media after all.  Roman Hamrlik, he of the $5.5m annual compensation for this season and the past three, a former first overall draft pick, three time NHL All-Star, Olympic gold medalist, and second on the team in minutes played only to Carey Price, is apparently the 2010-11 Jacques Beauchamp-Molson Trophy winner as the team's unsung hero.  I'm really not sure what to make of this at all.  Can a player of Hamrlik's stature truly be an unsung player?  And if so, whose fault is that?

Early in the season, I wrote a piece trying to highlight Jeff Halpern's unsung qualities.  I actually meant to write a piece on Hamrlik at about the mid-season point, but I got sidetracked.  Dave Stubbs of the Montreal Gazette did do one (and then another a month later), though from a different angle than the way my story would have gone.  The crux of my argument would have been on the qualities he still did well at his age, and why the Canadiens should consider re-signing him, as most fans seemed to be sending him out to pasture, so to speak.

Hamrlik's selection would be a good story, stepping in to a role that the younger, and more talented Andrei Markov likely would have handled if not for his injuries.  The thing is, he did the same thing last year, teaming up with Jaroslav Spacek to form the team's shutdown, tough minutes pairing, and keeping the team at least treading water when Markov was out.  This year, though his partner changed from the first half of Spacek and sometimes P.K. Subban to James Wisniewski, he was able to repeat his performance.

I realize that market value and being 'unsung' are not necessarily the same thing, but isn't the fact that Hamrlik's praises weren't widely touted in the media in his four seasons of play before now a bit of a statement against the so-called expertise of the collective media?  The man was the biggest unrestricted free agent signing in Montreal's history (Mike Cammalleri's contract was larger two years later), yet after four years only now does he get acknowledged for doing what he's always been doing, the reason why he's paid only slighty less than Markov. Either he's getting awarded for doing a great job that isn't interesting enough to sell newspaper copy, or he's getting awarded because only now have the media members realized he's a very good player.

Finishing second this year was Hal Gill, who would have been the most highly paid player to win the award if he had won it (making around the league average at $2.25m), while 3rd to 5th place were true bargains:  Mathieu Darche (league minimum, $500k), Jeff Halpern ($600k), and David Desharnais ($550k).

Robert L edit: Here is a list of past Jacques Beauchamps Trophy winners from the Canadiens 2010 Media Guide. 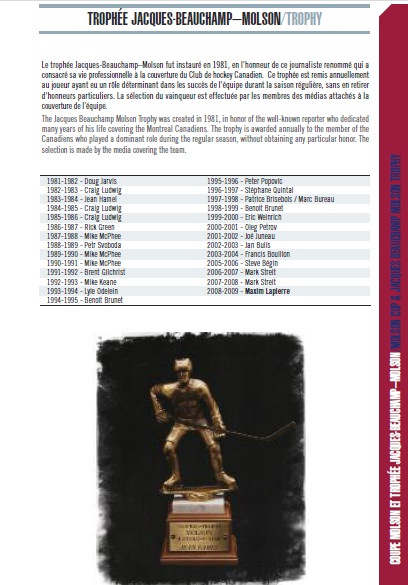