Share All sharing options for: Habs lose another "coulda, shoulda" to Bruins, series tied at two

Tonight was an excellent example of how the NHL regular season results mean squat all in the Stanley Cup playoffs. From October to early April, the Boston Bruins couldn't buy a point a the Bell Centre. In the playoffs, they've won two games in a row.

The Montreal Canadiens now find themselves in a best-of-three for the chance to advance to the second round. Idealistically, had they played in the first half of tonight's game in Game Three, and the latter of that game tonight, this may have been a sweep, But unfortunately you can't get the best of both worlds all of the time.

The Canadiens dominated the first half of Game Four, dissecting the slow Bruins defense and mounting a 29-12 shot advantage. Three of those shots had found the net behind TIm Thomas by 7:47 of the second period.

As much as the questionable play of Thomas has been discussed in this series, and it could have been much worse for the Bruins if not for him. In the first period and into the second, the Canadiens had total control, and either couldn't beat Thomas or just get that killer instinct to finish things off early.

Claude Julien, with only one goal thanks to Michael Ryder, smartly took a timeout after Andrie Kostitsyn's goal made it 3-1. It was certainly a turning point for the visiting team as they would manage 23 shots the rest of the way.

Andrew Ference put them within one at 9:59 after a knuckleball shot fooled Carey Price. Ference then gave a "How do ya do" to the Bell Centre crowd, so he can expect a call from Colin Campbell tomorrow. This time around there is a precedence as his opponent, James Wisniewski, was clipped two games for doing the same gesture earlier this season.

At this point however, the Canadiens defence disintegrated. Patrice Bergeron tied it up at 17:04, when both he and Brad Marchand were behind the Montreal defence and alone in front of Price.

Bergeron took a critical hooking call early in the third period, leading to a power play goal from P.K. Subban.

It looked like the goal might hold, as Carey Price stood on his head, and even threw in a Cirque de Soleil move, to keep the Bruins at bay. But once again his team let him down as Jaroslav Spacek decided to chase Ryder towards the corner. The ex-Hab, playing like his NHL career was on the line (and probably is/was) made a no-look pass that got caught up between the skates of Brent Sopel and landed on the stick of an open Chris Kelly.

A last chance power play in the third period yielded just two shots for the Canadiens and the two clubs were headed to overtime. Those two shots set the tone for a Habs offense that mustered just nine  at Thomas after the Kostitsyn tally.

The two clubs entered the extra period, where Subban appeared to get caught trying to do everything. The Habs rookie rearguard found himself in the offensive zone alone, and was forced to fend for himself, eventually making a weak pass attempt, causing a turnover. Subban then needed to rush back to his own end, and help get the puck out of the zone.

Tired, he was slow to get off, as were a couple other Habs on the line change, and a three on one ensued. Ryder, once shunned in the Bell Centre would be the hero of the night, as he sat wide open in front of Price.

The Canadiens are now headed back to Boston for Game Five on Saturday. A lot of people felt the winner of tonight's game would win the series..What do you think?

The winning side's opinion from Stanley Cup of Chowder Here's their thought on Ference's gesture, " If Ference gets fined for his gesture, I say it was money well spent. If he gets suspended, it was a dumb selfish move."

Just a note in regards to comments below on the "offside call" that wasn't made.

A player is on-side when either of his skates are in contact with, or on his own side of the line, at the instant the puck completely crosses the leadingedge of the blueline regardless of the position of his stick. However, a player actually controlling the puck who shall cross the line ahead of the puck shall not be considered "off-side," provided he had possession and control of the puck prior to his skates crossing the blue line. 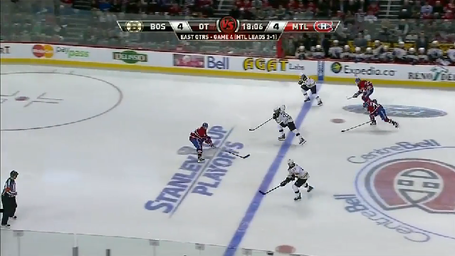 In this instance it seems as though Kelly's back skate is raised, making him offside. To expect a referee to catch this at full speed is not realistic so it is a moot point, but he appears offside. Once again, when you add in the bias of two fan bases that saw the Chara incident 180 degrees differently, you have to realize that Hab fans will see a skate "raised" and the Bruin fan will see it "planted".