Share All sharing options for: Cornwall Arena Where Rocket Scored His First Canadiens' Goal About To Meet The Wrecking Ball 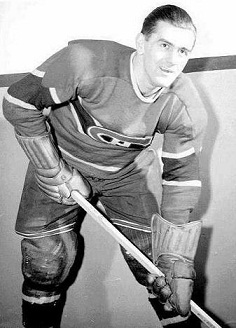 It is a little known fact, a part of local lore in my hometown that the great Maurice "Rocket" Richard scored his first ever goal in a Canadiens uniform during an exhibition game against Boston at the Cornwall Community Arena in October of 1942. Soon, the old dilapitated arena will be greeted by a wrecking ball, wiping out one of the city most notorious landmarks and a building that housed hundreds of great hockey memories for every Cornwallite.

A few years back, while reminiscing through my own great times inside the old barn, a friend told me that he once heard that Rocket Richard scored his first goal at the CCA. That thought stuck with me, as I wondered how that would have been possible. I remember thinking it would be a neat thing if I could look it up, and either prove or disprove such a notion.

About a year ago, while I was still posting daily at EOTP, I discovered the Google News Archives, which eventually launched my writing in a whole other direction, as it provided me with innumerable tentacles for exploring the career of Newsy Lalonde. The archive search is an amazing research tool, as several times I have employed it to verify all sorts of tales long forgotten. When the Rocket goal was mentioned to me, I got busy searching everything I could find in the Montreal Gazette archives, and those of other French newspapers available that covered the Canadiens 1942 training camp.

It turns out the story is in fact true. Maurice Richard likely scored a bunch in red and white game scrimmages but his very first goal in a Canadiens sweater against another NHL club happened in Cornwall at the CCA on October 22, 1942. After assisting on a goal by Elmer Lach, late in the second period, Richard was set up by Tony Demers early in the third frame, helping the Canadiens to a 6 to 2 win.

One of my biggest questions I had when first doubting this story, concerned why the two clubs would be paying a game in Cornwall in the first place. It turns out the reasons are very sound ones. During World War II, the army had commadeered several Montreal and area arenas from summer to fall for training pruposes. As the Boston Bruins could not set up shop in the Montreal region as they had done previously, they chose Cornwall so as to be close to the teams they sought to play exhibition game against. The Canadiens also set up briefly in Cornwall, extending their stay due to available ice time and numerous competitive opponents. The Habs and Bruins, although of NHL calibre, played games against newly formed Army clubs, the local Cornwall Flyers and a senior team from Lachine.

You'll notice from the articles below scanned from the local Standard-Freeholder and the Montreal Gazette that it was indeed a different time in hockey history.

Earlier this week, Cornwall city council elected to sell the property the arena is situated on rather than foot the half million it would cost to demolish it themselves. It's unfortunate the 75 year-old arena cannot be saved, but the city is looking into moving artifacts from it, and also the Bob Turner Memorial Center in to the newly built three-pad Benson Center. 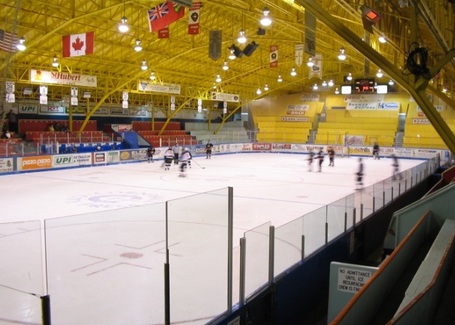 Inside the Si Miller in recent years. Love the yellow!

The Cornwall Community Arena was built in 1936, later becoming known as the Water Street Arena, and finally in 1994, as the Si Miller Arena, named in honour of the city's Director of Parks and Recreation since 1963. An arena capacity of 700 seats, was often stuffed to busting between 1969 and 1975 when it hosted the Cornwal Royals, then of the QMJHL. The 185 x 85 ice surface gave the house the atmosphere of a bears den, and there were countless bloody battled waged in the building over the years.

I'll miss "the Si" big time. The first hockey game I saw there was a game that made me a hockey fan, and a Habs fan forever. The tilt in question was a meeting between the Royals and Quebec Remparts in the winter of 1971. I was hooked while witnessing the visiting club's Guy Lafleur pot six goals while demolishing my home town team. You could say that day changed my life. In later years I saw my first rock concert at the WSA - Triumph and Goddo!, coached some of my Bantam teams there, and finally watched both my girls first hockey strides, leaning on and pushing a chair around the rink.

News in the local paper than the Bruins were coming.

The Canadiens goalie then was Paul Bibealt. Notice the ad to the right for victory bonds.

Former Maple Leaf Gord Drillon was the game's star. He would join the Army the following year, making space for Richard.

The scoring summary for the game. Interesting that Aurele Joliat was a linesman for the game, and that the Canadien were often refered to as Canucks back then.

An article from the Cornwall paper quoting coach Dick Irwin on Richard's chances of making the club. The Ambulance Line? 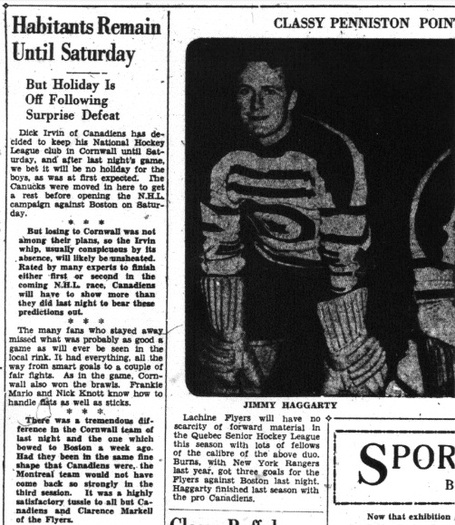 The Canadiens stay is extended, but Irvin isn't too happy to lose to a Cornwall team. 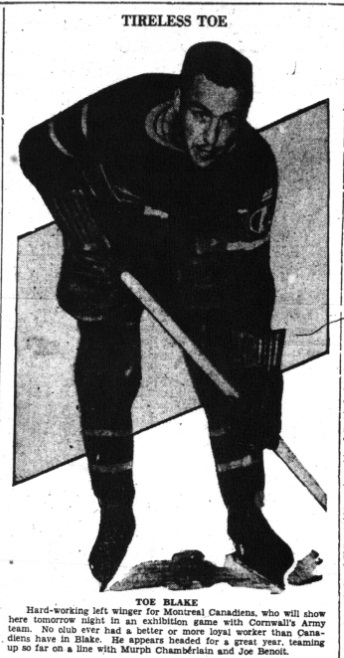 The great Toe Blake played a game will the Cornwall Army club during his stay.

A few descriptions of the Richard goal. 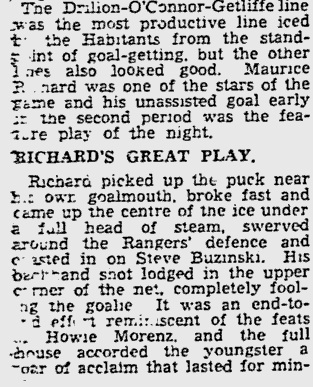 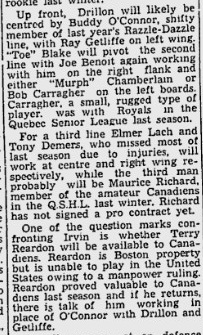 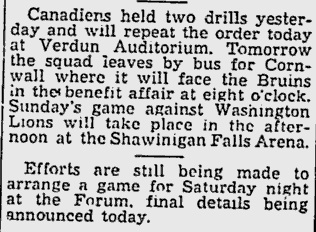 The Gazette notes that the game in Cornwall was an Army benefit game. The Washington Lions were a Canadien's farm club at the time. 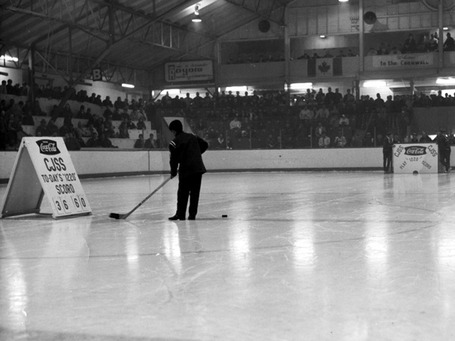 The Water Street Arena in all its glory. Note the standing room patrons. I remember it being much more crowded at times. 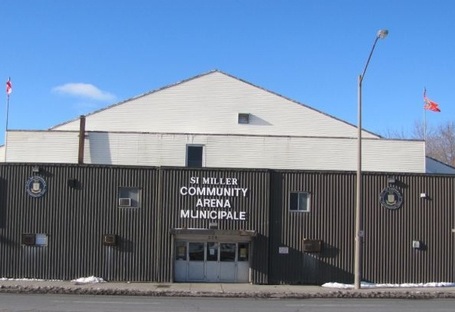 The Si Miller today, as it will be no more.