The Case for Carey

Share All sharing options for: The Case for Carey

In June, when the playoffs are done, it is all but a certainty that Tim Thomas will win his second Vezina Trophy in 3 years, and by all accounts (my own included) he deserves it. He's posted a league record save percentage on a team that gives up a lot of shots, although they are defensively sound. However despite his stellar numbers, I do not think Tim Thomas stands alone atop the most dominant goaltenders in the NHL this season.

At first when I started looking at the statistics at face value, I did not think there was any argument to be made against Thomas winning the Vezina aside from the obvious, that he did not play as often as the prototypical franchise goaltender is expected to in today's NHL. That is when I discovered a fairly new section of statistical breakdowns on NHL.com player profile pages called 'splits'. While by no means definitive, I think a case can be made that Carey Price, put up a performance significant enough to challenge Thomas.

Before we get to the statistics, let's get the non-measurable arguments out of the way. It's impossible to quantify these arguments but I believe they have a significant place in evaluating performance. I think most people will agree that it is much more difficult to be a goaltender in Montreal than anywhere else in the league, certainly much more difficult that in Boston. The pressure to win in Montreal is intense, and the goalie gets the brunt of the blame for loses, along with the lion's share of the glory for wins. I think we can also agree that no player in the entire National Hockey League was under more pressure to succeed than Carey Price was this season considering the trade of Jaroslav Halak after his dominant post season performance.

This year was the most important of Price's young career, and failure could have defined his career in Montreal, even ended it. To succeed under these circumstances, and not just to have a good year but a great one, takes a special kind of mental toughness that is especially rare, even for elite goaltenders in the NHL. I think it is important to keep these factors in mind when looking at the statistics.

Now for the stats. We will start with Tim Thomas. The breakdown I found most interesting was the goaltender's records vs opponents, broken down by team record. Here are Thomas's stats from NHL.com: 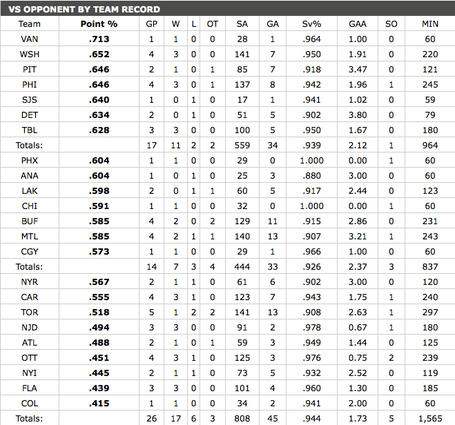 As we can see; from this table the largest portion of Thomas' games played, 26 out of his 57 or 45.6% comes against the bottom 1/3 of the league. The largest segment of Thomas' wins, 17 of 35 or 48.6% also come in this section, the bottom 1/3 of NHL teams that he faced. Thomas also faced 808 of his 1811 shots against by the bottom 1/3 of the NHL, a whopping 44.6%. I think we can all agree that it is more difficult for a goaltender to face good teams than bad ones, and more difficult to play more often than less often. A goalie who rarely faces the best teams in the league compared to his contemporaries will get less worn down over the course of a season, and therefore have better looking statistics overall.

It is a general consensus around the NHL that the Western Conference is the stronger one, so it naturally follows that facing Western Conference playoff teams would be the toughest challenge for goaltenders this year (a big thanks to Chris Topham of Lions in Winter for inspiring this comparison with his excellent article found here). How did Tim Thomas fair? A 3-4-1 record with a .938 SVP. A losing record but spectacular numbers. 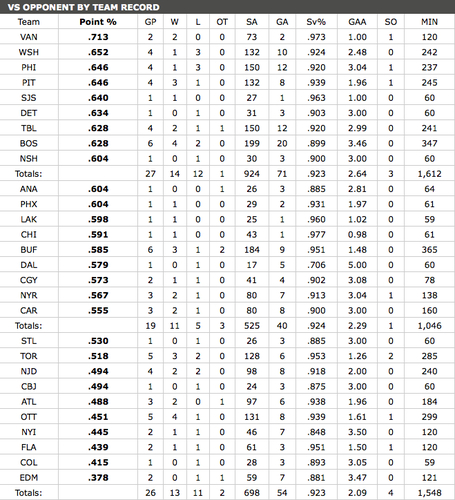 As you can see; Carey Price also played 26 games against the bottom 1/3 of the NHL. The difference however is that Price played 72 games this season, not 57. His 26 games against the bottom of the league account for just 36.1% of his total games played, and his 13 wins in those games account for 34.2% of his 38 total wins. The big departure between Carey Price and Tim Thomas however, is that Price played the largest chunk of his season against the top 1/3 of the league, 27 of his 72 games, 37.5%. He also recorded his largest portion of wins in that section, 14 of 38, or 36.8%. It is also interesting to note that Price was started every time his team faced an opponent in the top 1/3. The same can not be said for Thomas.

Price played a whopping 46 games against the top 2/3 of the NHL, Thomas played a mere 31. Price recorded 25 wins to Thomas's 18 against the top 2/3 of the league. Price also faced the largest portion of his total shots against while facing the toughest competition. 924 of the total 2147 shots Carey Price faced this year, or 43.1% were fired by the top 1/3 of the NHL's teams, as compared to just 698/2147 being fired by the bottom 1/3, or 32.5%. Price played and excelled against the top competition in the NHL more often than Tim Thomas did. He had a harder job, simply stated.

Now applying the same logic to Price, that the Western Conference is the toughest competition, and those that made the playoffs are obviously the elite of that conference, let's see how Price did. Against the Western playoff teams, Price went 6-2-1 with a .954 SVP. So against the toughest competition, again Carey Price played more, and better than Tim Thomas, with better results. Price was also the chosen goaltender in every match between the Canadiens and a Western powerhouse, while Tuukka Rask was started in several of Boston's games.

Another area where statistics show Carey Price to be in a league of his own, is how much time he was on the ice shorthanded. I think we can all agree that the most difficult time to be a goaltender is while your team is shorthanded. On average you face more shots and the shots are better quality. The following chart can be hard to read, but I'll explain it: 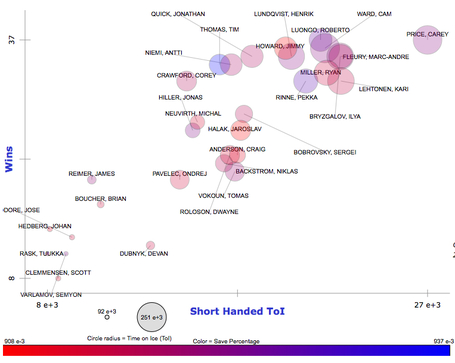 The x-axis is the most important part of this chart, as it shows the amount of shorthanded time on ice (TOI) each goaltender was forced to play this season. This is contrasted with the number of wins a goaltender achieved on the y-axis, the total TOI of the goaltender as the radius of the circle that represents them, and the save percentage they achieved as the colour of the circle, the bluer the better. So by this chart, the further left, the further up, the bigger your circle, and the bluer it is, the more impressive your season.

It is quite clear by these parameters Price stands completely alone. There's a cluster of elite goalies significantly far behind him in Roberto Luongo, Marc-Andre Fleury, Cam Ward, Pekka Rinne and Ilya Bryzgalov, and then Tim Thomas is more than half way back the chart with goalies like Jonathan Quick, Corey Crawford and Antti Niemi. It seems very obvious at this point that Carey Price had a higher degree of difficulty this season than any of his peers, and in spite of this excelled beyond most of them in overall stats.

It is important to note that in surface stats Thomas does fly by Price, and I do believe he will receive the Vezina. I think many put too much weight into surface numbers when it comes to goaltending. To me, the non-statistical factors, combined with the amount of time Price has played this season compared to Thomas make Price's season more impressive. Food for thought going into the playoffs, perhaps the Bruins don't actually have superior goaltending.

The full splits stat page for Carey Price is here.

The full splits stat page for Tim Thomas is here.