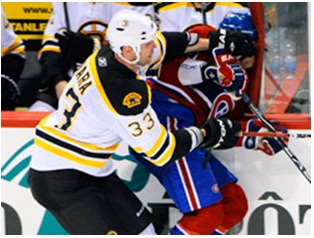 In a photo published in today's Journal de Montreal newspaper, the intent of Zdeno Chara to injure Max Pacioretty is clearly displayed by the position of both the defenseman's arms against the Canadiens forward as the check is made.

In the photo, Chara's right arm holds his stick parallel to the top of the boards. His left arm and glove, removed from the top of his stick, after the shoving crosscheck motion, pushes the side of Pacioretty's face into the turnbuckle, which is bent upon impact.

As intent to injure in this instance will be the case in point in determining what type of suspension Chara receives, the photo from Le Journal is quite incriminating, damning.

From the photo, intent is obvious.

Using his large body and stick, Chara rubs out Paciorettty, giving him nowhere to move to escape the hit, while his left hand and extended arm (notice a good six inches of exposed flesh)then clearly guides his head to the vulverable positioning of the glass.

Some opinions expressed so far have claimed that the position of the turnbuckle caused the injury, and that had the hit occurred on the opposite side of the rink Pacioretty would not have been carried off on a stretcher.

It is not about where the hit didn't occur, it is about where it in fact did occur. It has everything to do with why the hit occurred where it did.

It completely defies logic to suggest that had the glass partition not been there, there would be no injury to speak of. If one wishes to make points based on such hypothetical thinking, it would be no stretch of contrary imagination to say that had the play occurred on the opposite side, Chara does not hit Pacioretty at all, due to there being no partition there to rub him into.

There is much other evidence to consider that spell out Chara' intentions to get a piece of Pacioretty, and some of that intent can be seen in the Bruin's players recent actions when coming in contact with the Montreal forward.

There's no need to rehash all details involving the post-goal love tap from Pacioretty that initiated the feud between the players. Everyone has seen those clips numerous times. Following the winning Pacioretty goal in the January 8 game, Chara received a ten minute misconduct for his actions at 3:43 of the overtime period, wherein he swung punches several times at Canadiens players, namely Pacioretty, Scott Gomez and Hal Gill. Each Chara punch was thrown with his gloves still on his fists.

On February 9, in the infamous Beatdown in Beantown game, there erupts a scrum behind the Canadiens' goal at one point in which Pacioretty is involved, having just slipped a headlock from another Bruins player. As the two are tangling, Chara enters the fray and throws two shots at Pacioretty's head, while the Canadien's arms are held by the other Bruin. Again, Chara kept his gloves on, the virtual third man in the fight.

What is in some manners, very much circumstancial evidence to this case, are the numerous stick whacks administered by Chara to Pacioretty over the past two games. Falling under the heading of simple "hockey plays", the stick slashes to the back of the leg, etc, will have no bearing on proving Chara's intent whatsoever, no matter with what ferocity they were delivered.

Chara's hearing will begin today at noon with calls from the NHL's Mike Murphy to all the parties involved. On the Bruin's side of things, one can assume that the case to be made for Chara will involve stating that there was no intent to injure, that Chara is not that type of player, and that he does not own a previous history of incidents that would otherwise work against him.

However, the photo evidence is there to demonstate intent without much doubt. The actions of Chara since January 8 show in part what type of player he is. Furthermore, incidents unproperly punished since should, but likely will not, constitute a previous case scenario.

Where the rendering of judgement will become especially interesting is when considering what type of hit the NHL qualifies the incident.

As Pacioretty on the play, no longer had possession of the puck and was about to outdistance Chara by the boards, will the check be looked at as a blindsided hit to the head?

Likely not, as Pacioretty was completely aware of Chara's presence. What he was less aware of, in this case, was the turnbuckle. The partition, it could be said, due to Chara moving in on him, is what Pacioretty was blindsided. He cannot be looking both ways at once.

The parameters of such a take differ from the usual "headshot" cases of late, in that the impact was not brought about by Chara's shoulders or body, but by a long outstretched arm guiding Pacioretty's head to the partition.

Now it's time to see what the long arm of the NHL law will do.

My guess would be at least five game.

Here is a closeup of the photo. A good read from Tony Massaroti (what an awesone name, BTW!) of the Boston Globe. 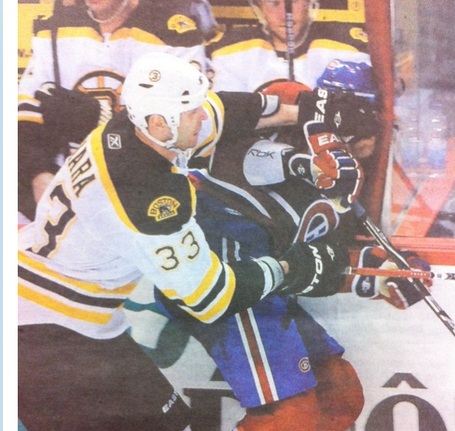