Share All sharing options for: March 16, 1961: Boom Boom joins the Rocket with his 50th

It's amazing what a difference a half dozen years can make. In the spring of 1955, Bernie "Boom Boom" Geoffrion won the NHL's scoring title. The fans of the Canadiens, however, were not impressed and were angered that Geoffrion had passed the suspended Maurice "Rocket" Richard to earn the title.

"I couldn't deliberately not score, that isn't the point of hockey," Geoffrion said. "I was so feeling the urge to vomit; I felt terrible. Even thinking about hockey made me feel bad, man did I want to leave. If it had not been for Jean (Béliveau) and Maurice (Richard) visiting, I would have.

"I can assure you that I had more heartbreak in winning the trophy (Art Ross) than Richard had in missing it. The Rocket never held a grudge against me. It wasn't my fault that Rocket got suspended."

But after five straight Stanley Cups, and with The Rocket retiring during training camp in September of 1960, things would change for Geoffrion.

The Canadiens were in the hunt for a sixth consecutive Cup. Richard's record of 50 goals in a season was not even on anyone's radar, especially Geoffrion who had peaked with 38 in 1955.

But as the season drew closer to the finish, and Toronto Maple Leafs Frank Mahovlich eying the Rocket's record, things would take a huge swing in the Habs' right-winger's favor.

Geoffion's 1960-61 season got off to a great start. By December he had surpassed his father-in-law, the great Howie Morenz, with his 271st career goal. He reached the mark against the Leafs, after reportedly promising his son Danny that he would score two goals that night. 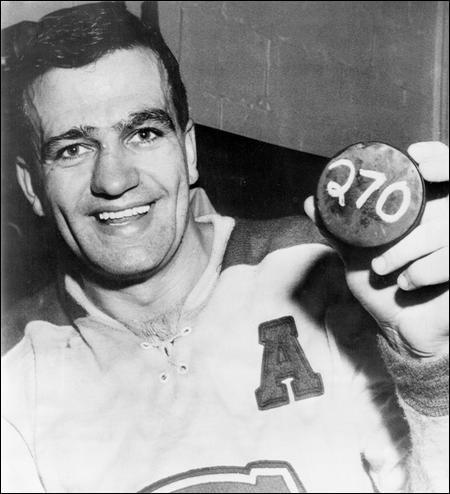 The thought of a 50 goal season began to float in Geoffrion's mind. Nobody, not even Howe, had accomplished Richard's feat that had stood for over 15 years.Teammate Dickie Moore appeared to have a shot, having 21 goals early on, but injuries and a scoring slump would eventually take him out of contention. Jean Beliveau? If anyone was going to do it, you would think it would be "Le Gros Bill" who had 45 just two seasons prior.

Could Geoffrion reach it, and if so how would fans react if he surpassed his childhood hero, and THE icon of Montreal hockey? One must think that sub-consciously he may have been thinking along the same lines as Roger Maris would later that summer, as he chased Babe Ruth's 60 home runs. If he did, he certainly never showed it, and never lost any hair over it.

While Maris would have Mickey Mantle to keep pace with him most of his season, Mahovlich was doing the same in the NHL. When Geoffrion was sitting at 17 goals, "The Big M" had 24 and by late January the lead was ten.

He then had a set back when a knee injury put him out for six games, and returned to action eleven back of the Leafs' winger with only 15 games left to play.

The mark seemed certainly impossible for any player, in almost any era, to reach. To be back of Mahovlich, by that margin, would almost rule him out of the league's goal-scoring title, let alone get to fifty. He would need 18 goals to get to the elusive mark.

Armed with his trademark slapshot, Geoffrion went on a massive spree and picked up eight goals over his next five games. It got the attention of a young hockey broadcaster named Brian McFarlane who in as noted in his book "True Hockey Stories: The Habs," predicted that Geoffrion could reach fifty.

Ten games to go, five back of Mahovlich and ten goals to tie Richard. The scoring tear continued as he potted three goals here ,and two goals there and scored his 49th goal in the Canadien's 67th game and Boom Boom's 61st.

The match-up was perfect as the Canadiens and Leafs faced off at the Forum. Montreal held a one-point lead over Toronto in the standings and Geoffrion had a two-goal edge over Mahovlich. You couldn't ask for a better setting, and to Geoffion's delight as the season progressed, the fans were behind their new scoring champion.

The pressure was off of the confident "Boom Boom", but oddly enough neither he or his wife Marlene couldn't sleep the night before.

The Montreal Forum was packed to capacity, with 15,011 fans in attendance. A reported 2500 others were turned away at the gates after the last ticket was sold.

The Leafs put former Canadiens star Bert Olmstead out to shadow the Canadiens sniper. Olmstead was one of the league's best defensive forwards and is highly credited with shutting down Howe on his attempt at fifty goals in the 1952-53 season.

Eight seasons later, Olmstead was doing more of the same, keeping his target of the night to just a pair of shots through 40 minutes.

His first crack at the coveted mark came midway into the final period. Jean Beliveau slipped the puck in front of the net to a waiting, and finally open Geoffrion. He had Leafs' goalie Cesare Maniago beat, but the goalie's best friend, the goal post, bailed him out.

A second chance would befall the Hall of Famer again, with about 10 minutes left to play.

Red Fisher relays the event in his 2009 writeup for nhl.com.

"As it developed, Beliveau was to start the play leading to "The Goal," winning a faceoff in the circle, dealing to Gilles Tremblay, who in turn delivered a seeing-eye pass to Geoffrion, once again alone in front of Maniago. This time, Geoffrion didn't miss the open side of the net with his fourth shot of the final period, his sixth of the game. What followed, while the noise exploded from the sold-out crowd of more than 15,000, was an outpouring of emotion from the players. They leaped on Geoffrion in a red torrent, knocking him off his feet, pounding him on the back as he lay there, tousling his hair while a deluge of programs, hats and shoe rubbers rained onto the Forum ice."

"It was like Christmas, New Year's Eve and everybody's birthday," Fisher also noted at the time of the goal. 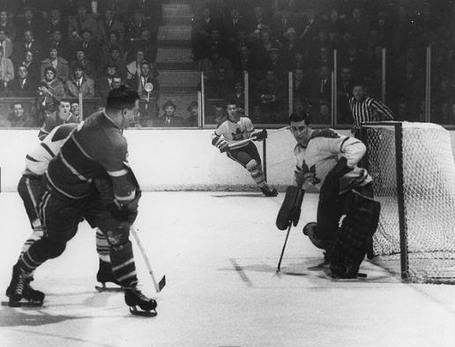 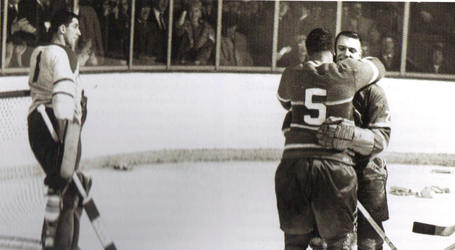 "Last night my wife kept telling me to go to sleep, that she was sure I would score against Toronto, but it didn't do much good," Geoffrion said after the game. "I was nervous out there and missed a couple chances before getting that big goal."

McFarlane was on hand for the event, but was discouraged to learn after that his cameraman had been bumped by a fan. He missed the actual goal, and recovered just as the players were celebrating.

Fifty goals would be as far as Geoffrion would get that season. Mahovllch finished with 48 and, like Howe, never made it to fifty goals in his NHL career. "Boom Boom" would also claim his second scoring title with 95 points, as well as the only Hart Trophy of his career as league MVP.

Geoffrion reflected on the season in Dick Irvin's book "The Habs."

"That was the best year of my career. I had great confidence. I remember Frank Mahovlich being ahead of me, and he stopped at 48. When I passed him, he couldn't believe it.

"I didn't do it by myself. There was Beliveau, Harvey, (Doug) Dickie Moore, (Henri) Richard, the whole gang. The thing I remeber the most is that nobody was selfish. If I was wide open, fine. If I was not open, hey, give the puck to Dickie or somebody else."

The Canadiens playoff run was a different story. Geoffrion was limited to just three of five semifinal games against the Chicago Blackhawks . He had suffered another knee injury and his leg was in a cast. With his team down 3-2, he was determined to play the next game. He had Doug Harvey tear the cast off on the train ride to Chicago and  urged coach Toe Blake to let him play. Blake agreed and Geoffrion iced his knee. A collision with Bobby Hull (the NHL's next 50-goal man) ended the game for him and the Habs lost 3-0 in Game Six.

Geoffrion never came close to the fifty goal mark again, as injuries and rumoured frustration from being passed over as captain took their toll. He would never admit to that, noting that scoring 20 to 25 goals in that era was like hitting .300 in baseball.

While the 50-goal mark would be reached by several players in the NHL, following Geoffrion's 1961 accomplishment, only four other players have done it while wearing a Canadiens sweater; Guy Lafleur (six times), Stephane Richer (twice) and Steve Shutt and Pierre Larouche once each.