Share All sharing options for: Heritage Classic Update: The rink build and tickets


The countdown to the Heritage Classic, between the Montreal Canadiens and the Calgary Flames is underway as the NHL's promotional tour has hit the Canadian prairies. The truck carrying the outdoor ice-making unit is well on it's way to Calgary. It made it's latest stop in Regina, and is now in Saskatoon.

Dan Craig, the NHL’s facilities operations manager, held a conference call later today to discuss the building progress and preparations at McMahon Stadium. HabsInsideOut has provided the full audio to the call.

Craig is a native of Jasper, AB, so he is aware of Calgary's sways in teperatures and is confident their equipment and staff can handle any situation.

The league has also unveiled the artwork for the official game program, seen below. Designed by Canadian visual artist David Arrigo, who is known for his sports and hockey-themed work and helmet art, the program cover art pays homage to the storied Canadiens and Flames franchises and hockey’s deep-seeded roots on the ponds of Canada. 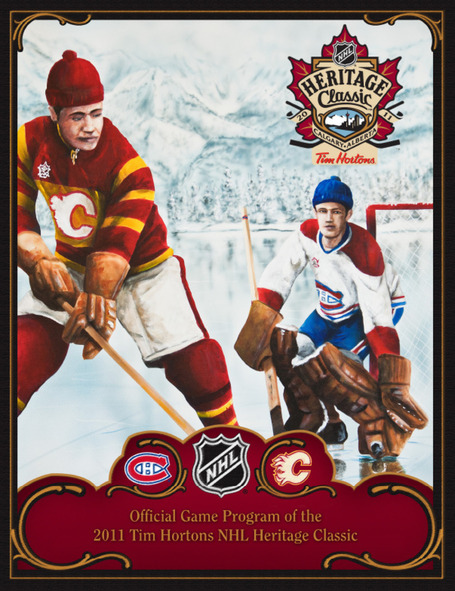 The 104 page program will be available for a reasonable $10.

The Canadiens and Flames will get their first chance to test the ice with practices on Saturday Feb 19 (they're scheduled to practice at the Saddledome Friday), followed by an game between Habs Alumni and former members of the 1989 Flames Stanley Cup winning team.

Also on Feb. 19, Spectator Plaza, an outdoor hockey and entertainment festival outside McMahon Stadium for fans of all ages with live musical performances, interactive hockey-themed attractions, prizing and giveaways, food, beverage and merchandise tents, will open to the public.  The two-day festival will be open from Noon – 6 p.m. (M.S.T.) on Feb. 19 and from Noon until game time on Feb. 20.

For a full four days of hockey, the Flames AHL affiliate the Abbotsford Heat host the Edmonton Oilers’ AHL team the Oklahoma City Barons at the Scotiabank Saddledome on Friday, Feb. 18. The weekend will conclude with a WHL game featuring the Calgary Hitmen hosting the Regina Pats at McMahon Stadium at 1 p.m. on Monday, Feb. 21.

Memories of the 2003 Heritage Classic.

The NHL's media promos have already hit the airwaves, and you've likely seen them already be it in the US (Versus) or Canada (CBC).  The narrator is legendary Canadian actor Gordon Pinsent, who recites phrases from the Heinz Ross poem, "Alive in All We Are."

WIn a trip to the HC: The Montreal Gazette (parent to our friends at Habsinsideout.com) are offering a chance for you and three friends to attend the 2011 Heritage Classic, as well as access to the practice and other goodies. Full details can be found here.